Yemen’s Central Bank has become the latest target of fugitive ex-Yemeni President Abdul Rabuh Mansour Hadi with the Saudi regime being behind the new scenario.

On 19 September, Hadi, who resigned as president and fled to Saudi Arabia, purported to fire the Central Bank governor and announced he would move the bank from the Yemeni capital, Sanaa, to a temporary base in the port city of Aden where the so-called ‘internationally recognized’ government is based.

Traders in the involved in importing food to the Arab peninsula’s poorest country say this decision will leave them financially The decision to move the central bank, seen as the last impartial bastion of the country’s financial system which has helped keep the economy afloat in wartime, is viewed as a major blow for suppliers who are mistrustful of the decision and expect even more chaos ahead. Foreign exchange is already scarce and the sources do not have confidence in the new governor. exposed and make it harder to bring in supplies, Reuters reported. Hadi dismissed the bank’s governor, Mohamed Bin Humam, named Finance Minister Monasser Al Quaiti in his place and decreed the bank be moved to Aden.

Meanwhile, in defiance to the move by Hadi, thousands of Yemenis have rushed to post offices at the request of the Ansarullah movement leader, Abdel Malik al Houthi to inject cash into a parallel institution.

President Saleh al-Sammad of Yemen’s Supreme Political Council has also directed the formation of a committee to follow the plan approved by the Supreme Political Council to shore up financial position of the central bank of Yemen. Recently, al-Sammad, directed acting prime minister, Talal Aklan, on Friday to form the committee and to follow up the implementation of the approved plan.

According to the Central Bank of Yemen regulations, this bank must always be based in Yemen and till 2018, a board of 8 persons will manage the bank. This board was appointed during the presidency of Mansour Hadi. However, Hadi has violated these regulations and illegally decreed that the bank relocates to Aden.

Yemenis accuse Saudi-backed Hadi of being involved in a scheme to drain old currency notes in the country while preventing the printing on new notes. In response to this devious scheme, Yemeni’s have come out in large numbers to donate what they can to shore up the Sana’a based parallel central bank on the country and defeat Saudi plan to weaken the country’s economy.

Experts believe that the move by Hadi to purport to relocate the central bank to Aden will have no have any major impact on the economy but is a plot to divide the country into north and southern regions. This is being done within the framework of the US-Israeli plan to redraw the map of the West Asia region.

The transfer of Yemeni clashes from the north to the southern parts of the country follows a reduction of Ansarullah forces attack on Saudi territory in the norther frontier region. The Saudi regime believes that the relocation of the central bank to Aden will compel Ansarullah forces to concentrate its war efforts on south.

The Central Bank of Yemen currently has approximately $1.2 billion in foreign banks which is meant to purchase basic necessities of the people in the war torn country. By taking control of this crucial cash, the Saudi-backed Hadi will prevent Yemenis from gaining access to the resources needed to purchase basic necessities including food and medicine. Such a move is meant to create a backlash against Ansarullah among the masses. However, Yemenis have reiterated their continued resistance and support for Ansarullah movement.

On Sunday, the Ansarullah movement said it will a government of “national salvation” to rival the Saudi-backed administration of fugitive Hadi in the south.

The move was decided by the Supreme Political Council” created in July by the Ansarullah movement and forces allied to Yemen’s former president Ali Abdullah Saleh. In early August, UN-backed peace talks in Kuwait between Yemen’s warring parties were suspended.

Saleh al-Sammad, head of the supreme political council, appointed Abdel Aziz Ben Habtoor to form a government of national salvation. As a move to torpedo Yemenis resolve to form an all-encompassing government, the Saudi have incited Hadi to declare the central bank has relocated to Aden and therefore present Ansarullah with a major challenge of lack of resources to run the government.

World central bank governors are set to meet in the next few days at the World Bank headquarters in Washington and it would be interesting to see who will represent Yemen in these meeting. However, due to the fact that the so-called internationally recognized government of Yemen is based in Aden, there is a likelihood that, under Saudi-US pressure, the Hadi appointed head of central bank will purport to represent the war-torn country in the annual meeting.

The US government is also pursuing a policy of controlling economies of countries in the world by pushing for central banks operating autonomously from their governments and war-torn Yemen is apparently being used to test this project. 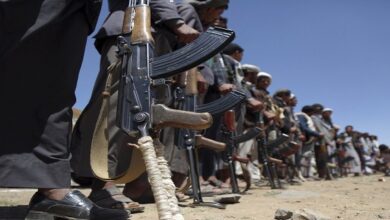