United Arab Emirates withdrew the first group of its troops from Yemen, and Yemeni Ansarullah not only has wrested control over the Saudi town of al-Rabooha, it has also seized control of a strategic area in southern Yemen and now it is behind the gates of Aden. All of these events have occurred in less than 48 hours, which show the speed of developments in Yemen, suggesting that the Saudi-led coalition is on the verge of collapse.

Yemeni local sources reported Sunday that Ansarullah forces and allies have seized control over all areas of the southern Governorates of Lahij and Dhale’a. This happened as Yemeni forces announced on Friday that they have begun an extensive operation to retake these two strategic Governorates. One of the most important advances was in town of Damt situated between two Governorates of Ibb and Dhale’a. According to Yemeni media, yesterday morning Ansarullah forces took control of the city. Khabar News Agency reported that some Afghan and Somali militants were arrested in Dhale’a Governorate who had been hired by Saudi Arabia to fight for the country. As the Ansarullah forces seized back the city, the allied forces returned to the gates of Aden, because the town of Damt towards the Dhale’a Governorate is the key to win back Aden.

With a short delay, the Western media also confirmed the news of advances made by Ansarullah forces in southern Yemen. Agence France-Presse (AFP) quoting its field sources reported: “in Lahij Governorate which borders with Aden, Ansarullah forces are on top of a hill which is in a higher position than the strategic military base of al-End.” HaykalBafana, an independent Yemeni analyst on his Twitter page wrote: “pro-Ali Abdullah Saleh forces are at the road to the airport and they have proclaimed that none of the Saudi mercenaries would leave al-End alive.” A military source told AFP that insurgent fighters (Ansarullah and the allies) managed to deploy their forces without any clashes and this creates a serious danger for the pro-Hadi and coalition forces.

Earlier it was reported that 2000 Sudanese troops have been deployed in al-End base. While Sudanese forces are surrounded at this air base, Yemeni sources said yesterday that dozens of Eritrean soldiers had been killed in a rocket attack on the air base. AFP also reported in town of Zabid, near the Strait of Bab el-Mandeb, Ansarullah forces took control of a military base after clashes with pro-Hadi forces. According to the report, last month pro-Hadi forces seized control over Zabid which has an important role in accessing the Strait of Bab el-Mandeb. Al-Masireh Network also reported that Yemeni armed forces and people’s committees affiliated to Ansarullah targeted a Saudi frigate in the port of al-Mocha near the Bab-el-Mandeb. This was the fourth warship of the Saudi-led coalition targeted by Yemenis. Meanwhile, Ansarullah and allied forces reopened Shabwah axis in southern Yemen. According to local sources, in this area Ansarullah forces enjoy the support of a large Yemeni clan known as al-Hashemiyon that has accelerated the advances of Ansarullah forces. Yemeni forces returned to southern areas five months after the Saudi-backed invasion in July 2015 in which they took control of the Governorates of Lahij, Dhale’a, Abyan, Shabwah and Aden.

These sudden field changes happened just a day after the United Arabic Emirates withdrew the first group of its military forces from Aden, and at the same time Ansarullah forces took the city of al-Rabooha in southern Saudi Arabia and flied the Yemeni flag in the city. Successive failures of Riyadh in Taiz, Marib, Lahij, Dhale’a and also in southern Saudi Arabia have given rise to growing speculations of Saudi activists over the collapse of the Saudi-led coalition in Yemen in the near future. HaykalBafana who is a critic of Ansarullah wrote: “I think there are not any Saudi or UAE soldiers in Yemen, though I do not have a proof to verify it. AFP quoting the Western sources also reported that only a limited number of Special Forces of UAE are left in Yemen. However, the Emirati media had reported that UAE would deploy new security forces in Aden, and the UAE officials have also stressed the continuation of war in Yemen. As there is no prospect of victory for the coalition forces in Yemen, it is believed that Emirates has decided to pull out its forces from the Yemen quagmire before it is too late.

However, Riyadh does not just accept its defeat in Yemen, and gives false news of advances made by Saudi-backed forces. Ahmed Asiri, spokesman of the Saudi-led coalition forces claimed yesterday that 70 percent of Yemeni territory is under the control of Saudi-led coalition. Considering the field realities, the activists ridiculed the stance of the coalition spokesman. Maxim ShopoAlenco, a senior analyst at the Center for Strategic Analysis and Technology of Moscow, in an interview with Sputnik News Agency challenged the victory claim made by Saudi authorities, saying “I believe that Houthis (Ansarullah) has not done their best, what we have seen so far is just a difficult prelude.” The Russian analyst pointed out: “The Houthis are primarily fighting in their native land. They have shown that in terms of professionalism, they are not less skilled than Hezbollah.” 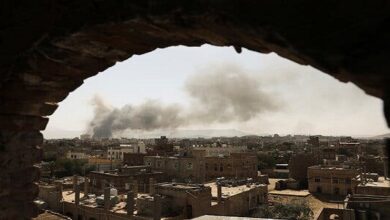