Thousands of Yemenis have held rallies across Yemen to mark the fourth anniversary of the country’s revolution which toppled long-time dictator, Ali Abdullah Saleh.

Yemenis took to the streets on Wednesday in various cities, including in the capital Sana’a, to celebrate the anniversary of Saleh’s downfall.

The demonstrators also called for the establishment of security across the impoverished country.

Four years after the February Revolution.

Yemen is currently the scene of massive political changes with fighters from Shia Ansarullah movement now in the control of Sana’a and some other major towns and cities across the country.

‘Do not to block Yemen’s revolution’

In a televised speech on Tuesday, leader of Yemen’s Shia Ansarullah movement Abdel-Malik al-Houthi warned against any plots to hinder the reform process in the country.

Houthi, who was addressing a huge gathering of people in the city of Sa’ada, said Western governments are trying to spread fear in Yemen by closing down their embassies in the Arab country.

“These are some people trying to spread fear among the diplomatic missions, aiming to scare them to the extent that they would flee the country even though they have realized that they live in a stable security situation which is clear, there is no need for these fears,” he said.

The United States, Britain and France have announced that their embassies in Yemen will close and have urged citizens to leave the country amid the ongoing turmoil.

The revolutionary leader defended his party’s decision to form a new revolutionary committee, saying that the formation of such a transitional council can thwart all plots against Yemen as it will put an end to the political vacuum.

Revolution will be inclusive

Houthi also asked all political factions in the country to contribute to the new political process and help the country build a better future.

“This is the responsibility and an ambition, do you have an ambition? To be active in the country and the whole country and to be a partner in decision making and a positive contributor in every way,” the Shia leader said.

Meanwhile, the Houthi movement continues to bolster its control over various parts of the troubled Yemen. Military officials confirmed Tuesday that Houthis took control of the province of Bayda, which is viewed as the main gateway to Yemen’s Sunni-inhabited south.

Houthi gained control of the capital city of Sana’a in September 2014, following four days of battle with army forces loyal to the country’s former dictator. The revolutionaries say the Yemeni government has been incapable of properly running the affairs of the country and providing security. 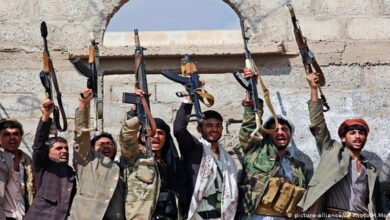