The US has imposed a new round of visa restrictions on thousands of Russian military officers in response to Moscow’s conflict with Ukraine.

The US State Department said in a statement on Sunday that it has slapped visa restrictions on 2,609 Russian and Belarusian military officers who have participated in the war with Ukraine.

“Under this authority, immediate family members are also ineligible for entry to the United States, including Viktar Sheiman’s wife, Elena Sheiman, and his adult son, Sergei Sheiman,” the department said in its statement.

The department also said that it will sanction eight Russian maritime-related companies which include Russia’s Ministry of Defense’s shipping company, Oboronlogistika OOO, accusing it of playing a role in Moscow’s annexation of the Crimea peninsula in 2014.

The department statement noted added that it took action against 69 vessels that the maritime companies use as well.

“The Department of State is also designating one maritime engineering company that works with the GoR and Russian state-owned entities,” the department said. “This action serves as a warning to private Russian companies that those who support Putin’s war machine risk severe costs.”

Russian President Vladimir Putin on February 24 ordered a “special military operation” in Ukraine’s Donbas region to “defend people” subjected to “genocide” there against government forces, stressing that Moscow has “no plans to occupy Ukrainian territory.”

US President Joe Biden called the Russian action an “unprovoked and unjustified attack,” and the American media described it as the biggest assault on a European state since World War Two assault by Russia.

Russia has repeatedly warned about the risks of a nuclear conflict in the region if NATO continues pumping weapons into Ukraine.

Washington and its European allies, however, have supplied Kiev with military equipment such as drones, Howitzer heavy artillery, anti-aircraft Stinger and anti-tank Javelin missiles.

To President Vladimir Putin, such military shipments are part of a broader plan by Washington and its allies to destroy Russia. 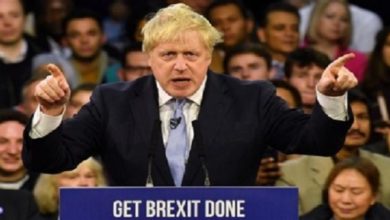