The US and its allies will “respond decisively” in the event of Russia’s military action against Ukraine, President Joe Biden told his Ukrainian counterpart, Volodymyr Zelensky, on Sunday.

In a statement, White House spokeswoman Jen Psaki said Biden asserted that the United States and its allies and partners will respond decisively if Russia “further invades Ukraine”.

“The leaders expressed support for diplomatic efforts, starting next week with the bilateral Strategic Stability Dialogue, at NATO through the NATO-Russia Council, and at the Organization for Security and Cooperation in Europe,” she further noted.

During the telephonic talk, Biden reaffirmed Washington’s commitment “to the principle of nothing about you without you,” as well as pledging support to Ukraine’s sovereignty and territorial integrity.

Zelensky appreciated the US’s “unwavering support” in a tweet after the call and said that “the first international talk of the year” with Biden “proves the special nature of our relations.”

He said “keeping peace in Europe, preventing further escalation, reforms, deoligarchization” were issues that figured in the conversation.

The first international talk of the year with @POTUS proves the special nature of our relations. Joint actions of 🇺🇦, 🇺🇸 and partners in keeping peace in Europe, preventing further escalation, reforms, deoligarchization were discussed. We appreciate the unwavering support of 🇺🇦.

— Володимир Зеленський (@ZelenskyyUa) January 2, 2022
The call came in the wake of Biden’s second conversation in a month with Russian President Vladimir Putin amid mounting tensions between Russia and Ukraine.

“We made it clear he cannot — I’ll emphasize, cannot — invade Ukraine,” Biden said earlier this week, discussing the call with Putin.

US President had threatened Russia with “severe sanctions” if it invaded Ukraine.

On the other side, Putin’s foreign affairs adviser told reporters last week that Putin warned Biden that pursuit of sanctions “could lead to a complete rupture of relations between out countries and Russia-West relations will be severely damaged.”

Russian government has repeatedly reiterated that the expansion of NATO military infrastructure in Ukraine is a red line for Moscow and any future expansion must exclude Ukraine and other former Soviet countries.

American and Russian representatives are set to hold talks on January 9-10 in Geneva to discuss the matter.

Kiev, Washington, and several other Western countries have been accusing Moscow of planning “an invasion” of Ukraine, as it is amassing troops near the border with the latter.

However, Russia rejects the allegations and claims that the deployments are defensive in nature.

The Red Bearded Terrorist of ISIS is French 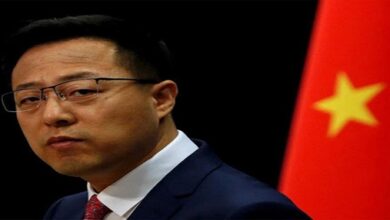