The foreign-backed militants fighting against the Iraqi government in the Western parts of the Arab country are receiving monthly salaries in cash from Riyadh and Doha, media reports said.

The Islamic State of Iraq and the Levant (ISIL) militants fighting against the Iraqi government in the city of Fallujah in Anbar Province in Western Iraq receive a monthly salary of USD 700 from the governments of Riyadh and Doha, the Iraq Al-Qanoun news website quoted member of Fallujah Liberation Council Maki Al-Issawi as saying.

A sum of 34 militant groups stationed in Fallujah carry out constant attacks on the government buildings and officials and civilians in Iraq. The militant groups are at odds with each other over the salaries they receive from the foreign countries, the report added.

Anbar province, which includes Fallujah and the provincial capital city of Ramadi, has been the scene of fierce clashes that flared up after Iraqi police dismantled an anti-government protest site outside Ramadi in late December last year.

Late in April, Iraqi Premier Nouri al-Maliki said Saudi Arabia has turned into a state of problems due to its policies in supporting terrorists in Syria, Iraq, Yemen and other countries.

Saudi Arabia lives the dream of toppling Syria, Iraq and Lebanon, but it will not succeed, al-Maliki said in an interview with al-Manar TV broadcast Monday, and called on Saudi Arabia to stop interfering in Iraq’s affairs and respect its interests.

Iraq is witnessing its worst violence in recent years. According to the UN Assistance Mission for Iraq, a total of 8,868 Iraqis, including 7,818 civilians and civilian police personnel, were killed in 2013, the highest annual death toll in years. 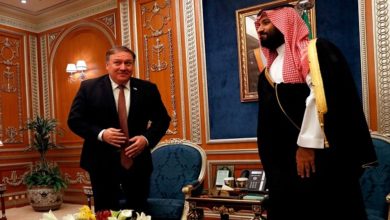 US support for the Saudi-led war on Yemen is in “America’s best interest”: Mike Pompeo