Saudi security forces have raided a number of cars and houses in the city of Awamiya in Eastern Province during an operation to arrest an anti-government human rights activist.

According to a video posted online, the incident took place as Saudi security forces stormed the house of human rights activist Abbas Ali Mohammed Al-Mazra on Monday.
One person is reported to be injured by the security forces.
Abbas al-Mazra is one of the 23 Saudi activists wanted by the kingdomâ€™s Interior Ministry for organizing anti-government demonstrations in the eastern cities of Awamiya and Qatif. Some of the activists on the list have already been arrested.
It was not clear whether Mazra was arrested in the operation.
Saudi Arabia’s Eastern Province has been witnessing anti-government demonstrations since February 2011. Protesters demand political reforms, greater liberties, freedom of expression and the release of political prisoners, who have been held without trial for more than 16 years.
They have also condemned economic and religious discrimination in the oil-rich region and their government’s involvement in a brutal crackdown on protesters in neighboring Bahrain.
In Saudi Arabia, protests and political gatherings of any kind are prohibited. Activists say there are over 40,000 political prisoners in the country.
According to the activists, most of the detained political thinkers are being held by the government without trial or legitimate charges and have been arrested for merely looking suspicious.
In Saudi Arabia, protests and political gatherings of any kind are prohibited. 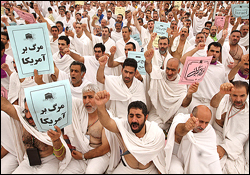 Ceremony of disavowal of disbelievers in Arafat desert