Sheikh Abdul Aziz Al Sheikh, the Grand Wahhabi Mufti of Saudi Arabia, had regarded the celebration for the birthday of Prophet Muhammad (PBUH) as being religiously groundless and found the celebrations to be a bunch of superstition and ignorance.

Describing the tradition of celebrating the birthday of the Prophet Muhammad as being “idolatrous”, Al-Sheikh warned about holding such an event, AWD news reported.

But with the coming anniversary of the ruling Al-Saud over Saudi Arabia, which is dubbed the “National Day”, the Mufti of the Saudi court issued a new fatwa, with a major shifting attitude.

Sheikh Abdul Aziz Al Sheikh, declared that changing the national day into “thanksgiving”, is a must and urged people, on this day, to extend their deepest gratitude towards God.

Al Sheikh preaches Wahhabism, a radical “ideology” that inspires Takfiri terrorists across the world. Such terrorist groups — particularly Daesh/ISIS/ISIL/IS — declare people of other faiths and beliefs as “infidels” and, based on “decrees” from Saudi “clerics,” rule that they should be killed. The word Takfir is Arabic for “declaring as an infidel.”

In the eyes of Wahabis, historical sites and shrines encourage “shirk” – the sin of idolatry or polytheism – and should be destroyed. When the al-Saud tribes swept through Mecca in the 1920s, the first thing they did was lay waste to cemeteries holding many of Islam’s important figures. They have been destroying the country’s heritage ever since.

For many years, hardline Wahhabi clerics have had their sites set on the 15th century green dome that rests above the tomb holding the Prophet Muhammad in Medina. The mosque is regarded as the second holiest site in Islam. Wahhabis, however, believe marked grave is idolatrous. A pamphlet published in 2007 by the Saudi Ministry of Islamic Affairs, endorsed by Abdulaziz Al Sheikh, the Grand Mufti of Saudi Arabia, stated that “the green dome shall be demolished and the grave flattened in the Prophet’s Masjid”.

However, this is not the first time such a ridiculous fatwa has issued by these Wahhabi clerics. There are such ridiculous fatwa (religious decree) such as: – a fatwa that allows starving men to eat their spouses to save their own lives, – Girls, forget dolls and toys! Prepare to get married the day you blink after being born, – There is jihad. There is rape. And then there is “sexual jihad, – Infidel, if you think the Earth is round and revolves around the sun!, – Kill the evil Mickey Mouse!, – Say no to nudity during intercourse, – Feel ashamed working with male colleagues? Breastfeed them!, – Muslims who do not pray are apostates and should be killed, – jihadist fighters in Iraq should adopt a “heavy-handed” approach and kill any Shiites they can get their hands own…. and hundreds more.

US PANEL NAMES SAUDI AS ONE OF 13 RELIGIOUS VIOLATORS 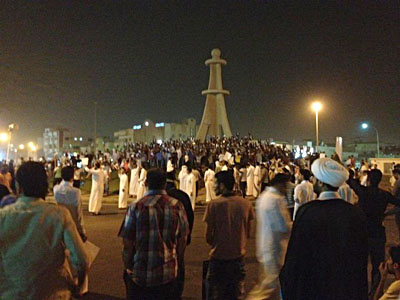 Protests in support of Shia cleric continue in Saudi Arabia