“This ruling shows that the use of Internet and social media platforms by journalists and bloggers, which are intended to be a place where they should exchange information and discuss various matters, is still strictly controlled in the kingdom,” Sabreen al-Nawi, director of the Middle East Division at Reporters Without Borders, (RSF) said.

The group noted that the lengthy jail term handed down to Abu Lahoum came after he published tweets “considered by Saudi officials as an invitation to atheism and apostasy.”

It went on say that the Yemeni journalist’s wife desperately tried to contact him several times, before she understood that her husband had undergone a criminal interrogation without the presence of an attorney.

She was not allowed to see Abu Lahoum until ten days after his detention, and the family visit was very short, RSF said.

The organization said the verdict was issued against the Yemeni journalist on October 26, more than two months after he was detained.

For its part, the Journalist Support Committee called on Saudi Arabia to release Abu Lahoum “and to refrain from measures against him or any other journalist, which would affect their right to freedom of opinion, expression and publication.”

The committee underscored its “refusal to imprison or prosecute any journalist over publication of any material he has presented to public opinion through news platforms or media outlets.”

The committee then called on Saudi authorities to stop intimidating journalists and media activists, and reminded them of the need to respect their commitments under international declarations and agreements, especially those that guarantee freedom of opinion and expression – the Universal Declaration of Human Rights above all.

Abu Lahoum, who has been residing in Saudi Arabia since 2015, was reportedly working in a commercial media organization in the country’s southwestern region of Najran.

He had earlier worked as an executive director for the Saudi Arabic-language al-Wadi television station.

Saudi Arabia shows little tolerance towards journalists, including independent ones, and freedom of speech.

In its 2020 Press Freedom Index, Reporters Without Borders said the kingdom ranked 170 out of 180 countries, where No. 1 is the most free.

Ever since Crown Prince Mohammed bin Salman became Saudi Arabia’s de facto leader in 2017, the kingdom has ramped up arrests of activists, bloggers, intellectuals, and others perceived as political opponents, showing almost zero tolerance for dissent even in the face of international condemnations of the crackdown. 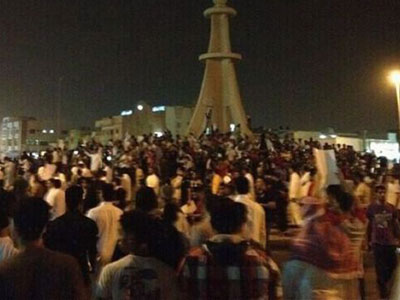 People Stage Rally in Najran for Independence from Riyadh Gov’t