US human rights organizations have expressed fears of Saudi Arabia’s use of death penalty.

Human rights organizations urge Saudi Arabia to halt death penalty, immediately release all those detained for exercising their rights and drop of charges against them.

In a written testimony given to the 44th session of the United Nations Human Rights Council, Americans for Democracy and Human Rights confirmed that the recent executions exacerbated fears that the country would press ahead with more executions.

It explained that the executions in Saudi Arabia had increased steadily since 2015, as 184 prisoners were executed, noting that Saudi Arabia executed 37 prisoners on one day (April 23, 2019).

The organization confirmed that the alleged Saudi accusations of prisoners, especially with regard to demonstrating and causing chaos, were coerced through torture and unfair trials, noting prominent cases of political prisoners currently awaiting execution despite international attention and pressure on the Saudi government to not go ahead with these cases.

According to the organization, Saudi Arabia has violated many basic human rights and legal principles enshrined in the Convention against Torture and the Convention on the Rights of the Child, including cruel, inhuman or degrading punishment.

It emphasized that Saudi Arabia, as a member of the Human Rights Council, must stop its systematic and widespread practices in ignoring human rights severely by arbitrarily targeting political activists and human rights defenders.

184 people in Saudi Arabia were executed last year, including 90 foreign nationals, according to a report by the legal charity Reprieve. Of those executed, 82 had been executed for smuggling narcotics and 57 for committing murder, according to Reprieve’s execution tracker.

There has been a rise in executions since 2015, when the charity began keeping records of the executions, which are officially announced by the Saudi government. By comparison, 88 people were executed in 2014, with that number nearly doubling to 157 executions a year later. That number remained steady until last year, when 184 people were executed, 35 more people than in 2018.

Four individuals have been executed in 2020 so far, Reprieve said.

Saudi Arabia, and in particular Crown Prince Mohammed bin Salman, has faced increasing criticism for its record on human rights in recent years, as the international spotlight has focused on the murder of journalist Jamal Khashogghi and the humanitarian crisis in Yemen.

Five individuals have been sentenced to death for their role in the murder of the late Washington Post journalist.

On April 23 last year, 37 people were executed in a single day, including a prospective college student on his way to the US, prompting outrage from members of Congress, such as Rep. Rashida Tlaib.

Amnesty International condemned the judicial process behind those executions as “sham trials that violated international fair trial standards which relied on confessions extracted through torture.” State Department officials declined to specifically condemn the executions at the time.

It is not known how many prisoners are currently on death row in Saudi Arabia. Among those awaiting “imminent execution” are Ali al-Nimr, Abdullah al-Zaher and Dawood al-Marhoon, who were convicted for participating in anti-government protests during the 2011 Arab Spring, and were profiled by ABC News in July 2019.

Maya Foa, Reprieve’s director, called on the US and UK, two of the kingdom’s major partners, to call out the executions in the “strongest possible terms,” saying that international pressure “can make a difference.”

“Saudi Arabia’s rulers clearly believe they have impunity to flout international law,” Foa told ABC News. “International pressure can make a difference, as the case of Murtaja Qureiris showed last year. Saudi prosecutors wanted to sentence Murtaja to death for attending pro-democracy protests when he was 13 years old, but backed down following a worldwide outcry.”

“Governments and civil society groups now need to raise their voices for the other Saudi juveniles on death row: Ali al-Nimr, Dawoud al-Marhoon and Abdullah al-Zaher,” she added.

The rising numbers of executions comes despite a pledge from Crown Prince Mohammed bin Salman to “minimize” the use of the death penalty to special cases such as murder in an interview with Time magazine in 2018. 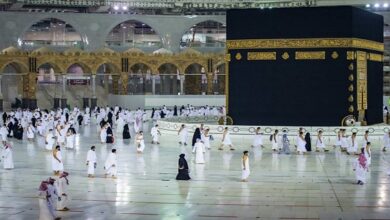