Racist and extremist Israeli settler groups of illegal Jewish settlement in West Bank have launched an incitement campaign against Palestinian President Mahmoud Abbas in the northern part of the occupied West Bank, calling for his assassination.

Illegal Israeli settlers put up posters near Yitzhar settlement south of the city of Nablus, located approximately 49 kilometers (30 miles) north of Jerusalem al-Quds, on Tuesday, calling for the killing of Abbas. The posters read “supporter of terrorists” referring to Abbas as the financier of operations against settlers in the West Bank.
PLO slams Israeli settlers’ call for Abbas assassination
Meanwhile, Secretary General of the Palestine Liberation Organization (PLO) Saeb Erekat said on Tuesday that Tel Aviv regime should be held accountable for the consequences of the settlers’ call for the “assassination” of the Palestinian president.
Erekat said in a press statement that such a call is in line with “a systematic incitement campaign by Israel against our people and their rightful demands.”
“The call for the killing of the Palestinian president is an initiative to open assassination of the president and the liquidation of the leadership’s peace strategy,” he pointed out.
Erekat added that the Palestinian people and their leadership “take this threat seriously and demand the international community to move immediately to halt Israel’s unlawful policies and practices before it is too late.”
He also stressed the importance of providing the Palestinian people with international protection, saying, “International community’s silence paves the way for more killings of civilians and ethnic cleansing.”
The development came only two day after the UN Office for the Coordination of Humanitarian Affairs (OCHA) announced in a report that at least 11 attacks had been conducted by Israeli settlers against Palestinians in the West Bank between November 20 and December 3, resulting in Palestinian property damage.

Spokesman Rejects Trump’s Description of Hamas as A Terror Group 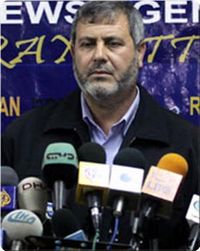