Israeli police Monday used force against Palestinian protesters who gathered in the courtyards of Bab-al-Amoud, (Damascus) Gate, one of the gates leading to al-Aqsa mosque compound in occupied al-Quds or Jerusalem. Around 100 have been injured in the Israeli forces attacks on protesters in difference places including parts of West Bank.

Police physically assaulted protesters and used pepper spray against them, injuring a young man. He was transferred to hospital for treatment.
Three other Palestinians were reportedly detained and led to a detention and interrogation center in the city of Jerusalem.
The occupied Palestinian territories and the Palestinians in illegitimate state of Zionist Israel observed on Monday a general strike in protest against the new racist Israeli law, the Nation-State Basic Law.
The new law was passed by the Israeli parliament on July 19 despite strong local and international opposition due to its obvious racist content, which says that Israel is the land of the Jewish people and its their state, totally ignoring the existence of two million non-Jewish Palestinians in Israel and four others in the occupied territories, who are the indigenous people of this land centuries before Israel was created in 1948. 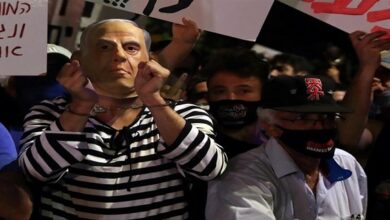