A United Nations expert says Israel has taken measures in violation of international law that would allow it to formally annex the West Bank.

“After years of creeping Israeli de facto annexation of the large swathes of the West Bank through settlement expansion, the creation of closed military zones and other measures, Israel appears to be getting closer to enacting legislation that will formally annex parts of the West Bank,” UN legal expert Michael Lynk said.

He made the remarks ahead of Monday’s United Nations Human Rights Council meeting on the Israeli-Palestinian conflict.

“This would amount to a profound violation of international law, and the impact of ongoing settlement expansion on human rights must not be ignored,” Lynk added.

He traveled to Jordan’s capital, Amman, last week to collect information for a report he plans to present to the UN General Assembly 73rd session in October. He worked out of Amman because Israel denied him entry into the West Bank.

“This is my third mission to the region since I assumed the mandate in May 2016, and the reports I received this week have painted the bleakest picture yet of the human rights situation in the Occupied Palestinian Territory,” he said, referring to Israeli restrictions on Palestinian movement in the West Bank, night raids and the lack of building permits.

He also said the situation of the Bedouin community of Khan al-Ahmar attests to Israel’s policy of forced relocation.

“Its residents are living in a coercive environment that may lead to forcible transfer, not knowing where they may find themselves in the coming months and not knowing if they will be living in a place where they are able to continue their traditional way of life,” he said.

The Israeli NGO B’Tselem reported on Sunday that authorities had entered the Bedouin herding village to begin preparations for its pending demolition.

Israeli officials and security forces walked through the community’s tents and shacks, taking photographs and mapping out their location, according to B’Tselem, which provided video of Israeli troops’ actions in the village.

The plight of the Khan al-Ahmar families – along with that of the Palestinian herding village of Sussiya, has received wide international attention. The EU and the UN have publicly called on Israel not to carry out the demolitions.

Israel plans to move the families to the town of Abu Dis, just outside of Jerusalem al-Quds, which US President Donald Trump has reportedly offered as the capital of a future Palestinian state under his “deal of the century” plan.

Palestinians want the West Bank as part of their future independent state, with East Jerusalem al-Quds as its capital, while the Israeli occupiers of Palestinian territories deem the West Bank as “liberated land,” saying formal annexation is only a matter of time.

More than half a million Israelis live in over 230 settlements built since the 1967 Israeli occupation of the Palestinian territories of the West Bank and East Jerusalem al-Quds.

Trump on December 6 formally recognized Jerusalem al-Quds as the so-called capital of Israel.

Emboldened by the American embassy’s recent relocation to occupied Jerusalem al-Quds, Tel Aviv is now pressing the US administration to recognize the occupied side of Syria’s Golan Heights as Israeli territory.

In an exclusive interview with Reuters in May, Yisrael Katz, Israel’s intelligence minister, said the subject is “topping the agenda” in talks with Washington.

Israel has built tens of illegal settlements in the area since its occupation and has used the region to carry out a number of military operations against the Syrian government.

On Sunday, Israel deployed additional tanks and artillery forces to the Golan Heights as the Syrian army made fresh advances against foreign-backed militants in Dara’a Province.

The recapture of Dara’a and the neighboring Quneitra Province is highly important because it could deal a blow to Tel Aviv’s plans to annex the Golan Heights.

The Israeli military raised its alert level in the Golan Heights on Friday as the Syrian army edged closer to the occupied region.

Thousands of Palestinians rally in Gaza to mark Quds Day 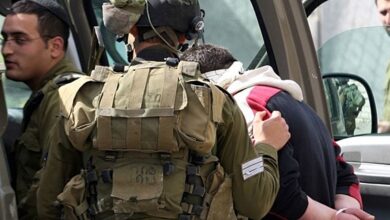