The United Nations’ top envoy to the Middle East has called on the international community to help prevent another war in the Gaza Strip, as Israeli military forces continue to brutally crack down on peaceful anti-occupation rallies near the border.

Nikolay Mladenov, the world body’s Special Coordinator for the Middle East Peace Process, told the UN Security Council on Thursday that Gaza had turned into “a powder keg” and that the world “must do everything possible to prevent another war” between Israel and the Palestinians.

Such a military confrontation, he said, might go on to include other countries in the region.

Protests along the Gaza border since March 30 have led to clashes with Israeli forces, who have killed at least 38 Palestinians and injured hundreds of others.

The rally, dubbed the “Great March of Return,” will last until May 15, which coincides with the 70th anniversary of Nakba Day (Day of Catastrophe) on which Israel was created.

Israel has already launched several wars on the besieged Palestinian coastal sliver, the last of which began in early July 2014. The military aggression, which ended on August 26, 2014, killed nearly 2,200 Palestinians. Over 11,100 others were also wounded in the war.

Mladenov warned that the new escalation had further dimmed the prospects for a solution to the Israeli-Palestinian conflict, “emboldening extremists and deepening polarization and mistrust on all sides.”

Referring to the growing number of regional conflicts rooted in extremism, the UN envoy said, “The Israeli-Palestinian conflict remains a perpetual source of oxygen for militants and radicals across the Middle East.”

Mladenov said there was no military solution to the conflicts across the Middle East, adding that de-escalation was critical “in this highly charged and dangerous environment.”

He urged everyone in the region “to step back from the brink.”

Every year on Nakba Day, Palestinians all over the world hold demonstrations to mark the anniversary of the forcible eviction of hundreds of thousands from their homeland by Israel on May 14, 1948.

More than 760,000 Palestinians were forced out of their homes on that day. Today, the number is estimated to have surpassed five million, including their descendants.

Israel has so far denied the Palestinians the right to return to their homeland, ignoring numerous UN resolutions and international laws. 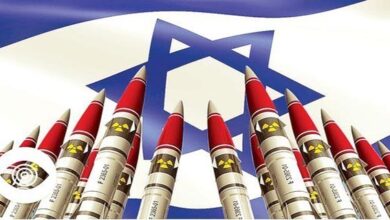