The United Nations General Assembly has voted overwhelmingly to upgrade Palestineâ€™s status at the UN from â€œobserver entityâ€ to â€œobserver non-member stateâ€ despite strong opposition by Israel and the US.

On Thursday, the 193-member assembly voted 138-9 with 41 abstentions at the UN headquarters in New York for a resolution approving the upgrade. Nine countries, including Canada, Israel, and the United States, voted against it.

Speaking before the vote, the acting Palestinian Authority Chief, Mahmoud Abbas told the General Assembly that it was “being asked today to issue the birth certificate of Palestineâ€¦”

The vote is seen as a long-sought victory for the Palestinians, but an embarrassing diplomatic defeat for the United States.

Having earned the observer non-member status, Palestinians enjoy access to UN agencies and the International Criminal Court where they could file complaints against Israel. The upgrade also allows the Palestinians to participate in debates at the UN and improve their chances of joining UN agencies.

The United States and Israel have spared no means for the past two years to stymie the Palestiniansâ€™ efforts towards upgrading Palestineâ€™s status at the UN, arguing that it is only through negotiations with Israel that Palestinian statehood ambitions can yield.

Following the Thursday vote, the US Ambassador to the United Nations, Susan Rice told the assembly, “Today’s unfortunate and counterproductive resolution places further obstacles in the path to peace. That is why the United States voted against it.”

In 2010, Israel broke down the talks after refusing to extend a moratorium on its settlement activities on the Occupied Palestinian Territories.

Hundreds of Palestinians have poured onto the streets of the Gaza Strip and Tel Aviv-occupied West Bank to celebrate the upgrade.

“I’m happy they declared the state even though it’s only a moral victory. There are a lot of sharks out there, but it feels good,” said 39-year-old Rashid al-Kor.

“I feel so good, I cannot describe my feelings, it’s as if we reached the end of a dark tunnel. With a Palestinian state, we are now united as a people and a leadership,” Palestinian-American Laila Jaman noted.

“This resolution does not establish that Palestine is a state,” Rice added. 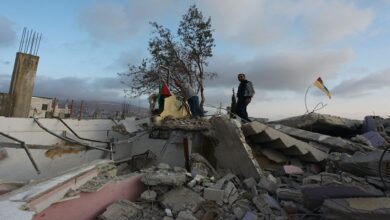 EU Calls on Israel to Halt All Demolitions of Palestinian Schools, Structures