We would never tolerate banned on Ashura juloos in Hangu

This statement was given by the Shiites of hangu after an official statement of Political administration of Hangu in which they imposed banned on the procession of Ashura juloos in Hangu.

Â According to the political administration of hangu statement Shiites of hangu are not allowed to pass juloos from previously traditional route, on other hand Shiites are saying that they would never compromise on azadari procession and Ashura juloos will pass from the same route as before, further they said they would never step back from giving any sacrifice for the Ashura jullos. Incase of any action against millat e jaffria protest will be held all over the Pakistan said by the Ulema, Scholars all over the Pakistan.Â

Saudi proxies fight each other in Pakistan over share in booty 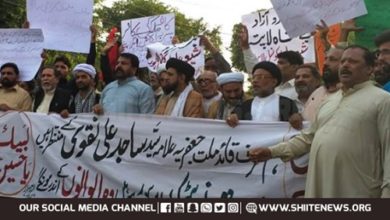 Nawaz Sharif disqualified as Prime Minister, his son-in-law and Dar as MNAs