The Shia leader Shaheed Askari Reza on Monday morning buried at local graveyard of Wadia-e-Hussain here in Karachi in the presence of thousands of mourners and companions.

According to the Shiite News Correspondent, The funeral prayer of Shaheed Askari Reza was offered at Governor House on Monday dawn led by Senior Shia

The protestors dispersed peacefully from the governor, after the Sindh governor passed an order meeting their demands to register the FIR against the nominated terrorists and judicial enquiry of Shaheed assassination.

The protesting sit-in held outside Sindh Governor House jointly staged by several Shiite organizations including (All Pakistan Shia Action Committee, Majlis-e-Wehdat Muslameen, Shia Ulema Council, Imamia Students Organization, Pasban-e-Jaffaria Foundation and Matami organizations of Karachi, lasted for no less than 10 hours against the killing of a key leader, Askari Reza and against the police.

During the sit-in about 25000 protestors including women, children, elderly men and youth were sitting on the road of Governor House located in the heart of the city, defying the roughness of chilly weather. It was a peaceful sit-in which continued for several hours without any eventuality.

Later, the authorities assured the demonstrators that their demands would be met which prompted the attendees to offer funeral prayer of deceased Raza outside Governor House. The dead body has been moved to Wadi-e-Hussain graveyard for burial.

On Saturday, the central leader of Pasban-e-Jafriya,and legal advisor of Shiite Community Karachi, Shaheed Askari Reza was shot martyred amid an assassination attack in Gulshan-e-Iqbal locality, leaving deceasedâ€™s friends critically injured on the spot. The assailants were riding motorcycle when they opened indiscriminate fire at the car of PJâ€™s leader.

The assassination triggered violence and panic in the metropolis since Saturday evening which turned out to be a massive protest gathering in front of Governor House by the end of the day.

Its pertaining to mention here that the the heirs of Shaheed Askari Reza announced to offer funeral prayer on Sunday at Shahra-e-Pakistan but later a large number of Shiite protestors rallied to stage protest at Shahra-e-Pakistan, demanding registration of FIR against the culprits and also asking for nominating SSP CID Aslam Chaudhry in the FIR, because police had refused to do so.

Subsequently, the protestors marched up to Governor House from Ancholi as the night falls and staged there a 22-hour long protest from 12 pm of 11st January to 9am of 2nd January.

Seeing the number of demonstrators rise, a six-member committee was summoned in Governor House for dialogue. Following the successful talks, Sindh Governor Ebad and Faisal Raza Abdi, Advisor to the President, assured the committee that the killers would be booked soon.

On the occasion, Ebad assured that the judicial inquiry would be initiated into the slaying, accepting the demand of case registration against SSP CID Chaudhry Aslam and Orangzaib Farooqi. Moreover, the lawsuit was registered with Gulshan-e-Iqbal police station upon the complaint of Dr. Samar Abbas and the brother of deceased Raza.

Consequently, the protestors scattered, concluding the sit-in at 6am on Monday after viewing the copies of FIR.

Pakistan Army Chief condemns killing of US troops in Afghanistan

Around 300 Deobandi Afghan clerics to be expelled from KP province

Pakistan offers condolences and sympathies to Iran over floods 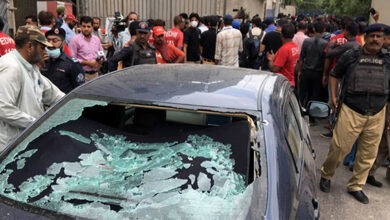