Apart from notorious terrorist ringleader Ludhianvi, another Deobandi cleric Tahir Ashrafi who was caught red handed when he was drunkard in the past, also attended the Saudi National Day party hosted by Saudi embassy in Islamabad.
Federal Minister for Religious Affairs Pir Noorul Haq Qadri hugged notorious terrorist ringleader Ludhianvi and their loud laughter were noticed by all on occasion.
It showed that Kingdom of Saudi Arabia is chief patron and supporter of Deobandi takfiris of banned terrorist outfit Sipah-e-Sahaba/Lashkar-e-Jhangvi. It also showed that PTI government is also a hypocrite and it is also an ally of Saudi Kingdom and it too is friend of Ludhianvi as vindicated by embrace, hugging and laughter of its minister with Ludhianvi. 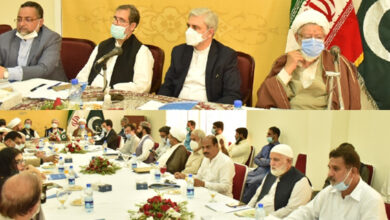