He is inciting Deobandis to vote against PTI’s Shia electoral candidate because of sectarian fanaticism. Farooqi’s original party was outlawed and proscribed and ringleaders of the banned terrorist group continue to rename their group.
Unfortunately, Farooqi and his group’s ringleaders have been allowed to contest elections despite ban on their group because of their patronage from among elements within the power that be.
Now, Farooqi is violating code of conduct of Election Commission of Pakistan by disseminating malicious takfiri propaganda against Shia citizens of Pakistan. Inaction against Farooqi and his comrades and their group has cast doubts on the transparency of electoral process in Pakistan. 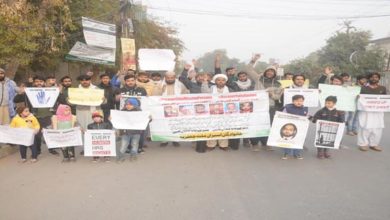 Families of Shia missing persons threaten self immolation in Multan

Karachi: Protest at Tibat Centre against Bolan and Jacobabad incidents