Three suicide bombers detonated in Quetta to target a police team on Airport Road and checkpost of Frontier Corps (FC) in Mian Ghundi area leaving at least 6 policemen dead and injuring many cops of FC and police.

A suicide bomber rammed his explosive-laden motorcycle into a police van that was traveling to the airport, district police Superintendent Razzaq Cheema said.
Earlier Tuesday, two other suicide attacks targeting FC checkpoints took place on the outskirts of the city, injuring eight military personnel.
Deobandi terrorists of Wahhabis-allied banned takfiri militant outfits have been claiming suicide bombings hence this time too they are believed to have been behind these targeted bombings. They include: Proscribed ASWJ’s subsidiary Lashkar-e-Jhangvi (aka Sipah-e-Sahaba), Daesh, Taliban, Jamaatul Ahrar, Jundullah, etc. 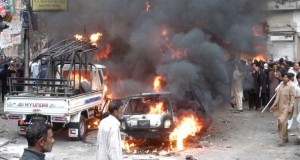