ISLAMABAD: Brushing aside the impression about capability of Pakistan’s armed forces in countering terrorism and militancy, Army Chief General Raheel Sharif Friday said the military was fully capable to protect integrity and sovereignty of the country.

“Let there be no doubt that Pakistan’s armed forces are battle hardened and fully capable to counter any internal or external threat posed to the integrity and sovereignty of our beloved country,” he said while interacting with the troops at FC headquarters in Khyber Pakhtunkhwa.

Earlier this month, the upper house of Parliament witnessed a heated debate on a recent TV interview of Pakistan Tehreek-i-Insaf (PTI) chief Imran Khan in which he had allegedly questioned the capability of the armed forces to take on the militants.

The cricketer-turned-politician in an interview had stated that during a meeting the prime minister had quoted former army chief Gen (retd) Ashfaq Parvez Kayani as saying that there was a 40 per cent chance of success of a military operation against militants in the country’s tribal areas.

The Chief of the Army Staff (COAS) appreciated the spirit and high morale of the troops and said that the entire nation acknowledged sacrifices rendered by security forces in the war on terror as part of national effort to eliminate the scourge of terrorism from Pakistan.

Gen Sahrif assured them that these sacrifices will not go in vain.

Recounting successes of the security forces in various operations against terrorists, he lauded the efforts and determination of all troops and Law Enforcement Agencies (LEAs) who cleared the militancy-hit areas, with the help of local population and support of the entire nation.

“We are fully prepared to confront any challenge in future as well,” the COAS reaffirmed.

Interior Minister Chaudhry Nisar Ali Khan yesterday said that carrying on with peace talks with the Pakistani Taliban amid terrorist attacks throughout the country would be injustice to the victims of such attacks.

Speaking at a press conference, he said Prime Minister Nawaz Sharif and the military leadership do not intend to carry on with dialogue amid terrorist attacks.

General Raheel Sharif was also briefed by the IG FC regarding ongoing operations in various parts of FATA and the province. 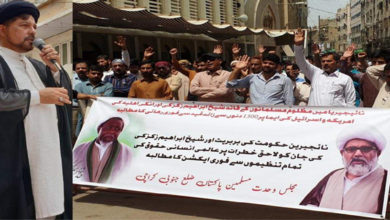 Karachi: One Shia Muslim wounded due to firing of Sipah-e-Yazeed

“I Killed 26 People Under the Orders of MQM Hammad Siddiqui”, JIT (Imran Saeed)