After Government and Taliban (TTP)’s Committees held first meeting in Islamabad’s Khyber Pakhtunkhwa House, Government committee’s coordinator Irfan Siddiqui heaved a sigh of relief that there was no difference between the two committees.
His statements proved that likeminded people held talks to hoodwink Pakistani nation because as a matter of fact the TTP has imposed a war on Pakistani civilians and security forces.
Government Committee comprising of Irfan Siddiqui, Rahimullah Yousufazi, Rustam Shah Mohmand and Major (R) Amir held first round of talks with Taliban’s Committee comprising Maulana Sami-ul-Haq, Professor Mohammad Ibrahim, Maulana Abdul Aziz and Yousuf Shah (Coordinator).
Independent analysts point out that they all are the supporters of the TTP. Sami ul Haq was the government’s man for talks with the TTP two weeks ago. JUIF is part of the PMLN government and Pakistan Tehrik-e-Insaf rules Khyber-Pukhtoonkhwa and its Rustam Shah Mohmand is part of the Government committee but TTP named JUIF’s Mufti Kifayat and PTI’s Imran Khan as members of the TTP committee that reflected no difference between the two parties.
The Committees’ members chalked out road-map for further round of talks. Irfan Siddiqui, special assistance to Prime Minister, said that it was decided that the talks with Taliban would be held within the ambit of the Constitution of Pakistan.
This statement evoked a stiff reaction from the critics who said that article 256 of Pakistani Constitution forbids any private militia in the country. Under that article, Taliban or TTP is an illegal militia. They said that article 5 wants Pakistanis to remain loyal to the State and obey the Constitution inviolably. The TTP never remained loyal to Pakistan and never obeyed the Constitution. Instead, they attacked the State’s security forces, installations and civilians.
Irfan Siddiqui said that the dialogue will be for conflict-stricken tribal area of country in which Taliban keeps attacking Pakistani military forces and also attacked civilians. The critics believe that the PMLN government has conveyed to the TTP team that they would be allowed freedom in the areas where they have imposed war.
Another condition is that the no terrorist attack will be made during talks. The TTP Peshawar claimed responsibility for the suicidal terrorist attack in Peshawar and two army personnel were injured in Waziristan after the TTP announced its committee for talks.
The TTP committee asked the government committee that Govt arrange their meeting with Prime Minister, Chief of army staff and ISI chief. They wanted to know how much powerful the government committee is?
According to reports, the talks were to be held Tuesday, but delayed after the government negotiators sought some clarification if the Taliban’s negotiating team will be reconstituted after JUIF’s Mufti Kifayatullah and PTI’s Imran Khan refused to become member of the TTP committee.
Prime Minister Nawaz Sharif says, he wants to give peace another chance to end the violence. According to report it was decided in the meeting that dialogue process to be continued between two committees members.
Earlier, Maulana Abdul Aziz said the Taliban wanted to have a meeting with their nominated committee. He said they were deliberating to visit Waziristan or call Taliban near Peshawar for meeting. He further said they could ask Taliban to provide their demands in written, however, the final decision in this regard would be made after meeting with government committee. 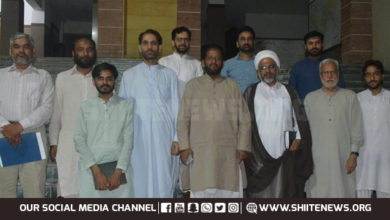 Five Shia organisations vehemently oppose US aggression in the region

8th Moharram Juloos-e-Aza brought out in all over Pakistan