A Shia photographer embraced martyrdom in his shop when Yazidi terrorists stormed into the shop and opened fire upon him.
Shiite News Correspondent reported on Sunday that Mehran Ali son of Manzoor Ali was sitting in his Photoshop in Gara Baloch, Tank of Dera Ismail Khan. Yazidi nasbi takfiri terrorists of outlawed Sipah-e-Sahaba barged into the shop and fired upon him.

He embraced martyrdom on the spot. Body was taken to hospital for postmortem and then to his house for funeral.

Shia parties and leaders condemned the targeted murder of another Shia Muslim. They said that gory incident in Khyber Pukhtoonkhwa province proved that Pakistan Tehrik-e-Insaf government failed in protection of lives and properties of people. They demanded military operation to eliminate the terrorists. 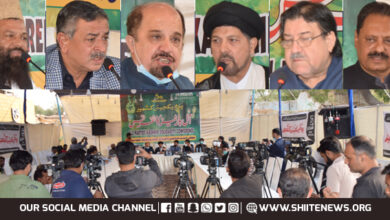