According to the Shiite News Correspondent, Muhammad Zaman 35, was shot to death near Liyari Telephone Exchange in Baghdadi area by the terrorists of Nasabi-Wahabi banned oufits. The body was brought to Civil Hospital. The martyred was the resident of Liyari Karachi and a reporter in a local newspaper.

Shaheed Faraz Hassan Rivzi was the only child of Mumtaz Hassan, the deceased and the injured were taken to Abbasi Shaheed Hospital.Â

According to police sources, the ill-fated father and son were on their way back home after shutting down their shop in Liaquatabad.

The terrorists belongs of Sipah-e-Sahaba, Laskhar-e-Jhangvi and Taliban were getting the benefit of the recent spate of target killings in the metropolis, have killed more than 9 Shia Muslims within a 15 days, but the government has failed to arrest the terrorists involved in the genocide of Shia Muslims in Pakistan. 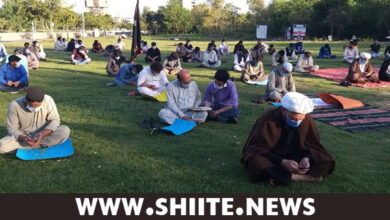