More than Eleven Shia Youths were detained by the law Enforcement Agencies from various parts of Karachi after a crack-down in the various parts of the metropolis.According to the Shiite News Correspondent, Law Enforcement Agencies has arrested more then Eleven Shia youths including Tanveer Abbas,Mazhar Abbas,Pervaiz Zaidi, Jahangir Naqvi, Sikander Rizvi, Abrar Rizvi, Mushtaq Rizvi, Hasnain Kazmi , Rifat Rizvi, Kumail Abbas and Mesam from Qasba Colony, Orangi Town, Federal B Area and Gulistan-e-Johar.The Police shows the arrest of Messam and Kumail abbas on Wednesday Night from Federal B Area Block 5 and alleged them that both of them are belongs from outlawed Sipah-e-Mohammad.The relatives of Messam and Kumail abbas have ruled out the allegations of Police about their kinâ€™s affilation with any organization saying that they are educated persons and not belong from any organization.Shabar Raza of Jaffaria Alliance Pakistan informed that Tanveer Abbas, Mazhar Abbas, Pervaiz Zaidi, Jahangir Naqvi, Sikander Rizvi, Abrar Rizvi, Mushtaq Rizvi, Hasnain Kazmi, and Rifat Rizvi were still missing, saying that neither police nor any law enforcement agency admitted about their arrest.
He said that their families were filed the petition in the Sindh High Court about the illegal detention of their relatives.
Tags
11 Shia youths arrested Crack down of LEA's in Karachi
Facebook Twitter LinkedIn WhatsApp Telegram Viber Share via Email Print 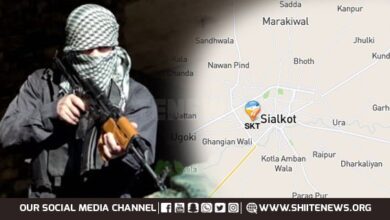 MWM says Gilgit-Baltistan being punished for unwavering loyalty to Pakistan