Addressing the â€œAfkar-e-Shaheed Arif Hussaini Conferenceâ€ on the occasion of 22nd martyrdom anniversary of Allama Arif Hussaini held at local mosque in Â Shah Faisal Colony, MWM Central leaders Maulana Shabir Bukhari, Maulana Mukhtar Imami and Maulana Ahmed Iqbal said that government has failed to eliminate the terrorists from the country saying that terrorists of outlawed organizations were destroyed the writ of the government at every part of the country.

They said that the more than 0.8 million population of Kurram Agency Parachanar was suffering the blockade of the Talibanâ€™s

Applauding the struggle of Shaheed Allama Arif Al-Hussaini, they said that they are following the footsteps of their leaders and not allow the United States, Israel, Britain and India to succeed in their conspiracies against Pakistan.

The leaders strongly condemned the recent incidents of target killing in Karachi and demanded of the government to take stern action against the culprits involved in the killing of innocent people in Karachi. 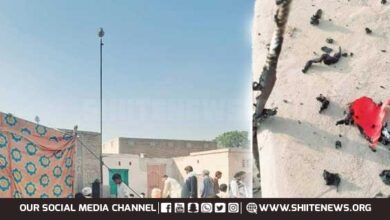