Jafria Alliance Pakistanâ€™s central secretary information, Ali Ahmer conveyed to Shiite News that Jafria Alliance Pakistan in its emergency meeting, three days ago, decided to boycott all invitations of Governmental officials for its heinous silence over the martyrdoms in Karachi closing all doors to negotiation. He elaborated that the Governor in the past two days have been instigated a number of phone calls inviting JAPâ€™s leader Maulana Abbas Kumaili for dialogue and ensuring apprehension of perpetrators involved in assassination of innocent Shiite commune. After much ado and sureties of actions against the miscreantsâ€™ central cabinet of Jafria Alliance decided to open dialogue and met the Governor.

According to Ali Ahmer, in the meeting today with the Governor, on a clear note it was firmly put forth to immediately arrest criminals of â€œSipah-e-Sahabaâ€ & â€œLashkar-e-Jhangviâ€ involved in the continuous target killings of Shiite populace and to reprimand them per their convictions. If the government had captured these slayers involved in mass massacres of incidences at Aashura and Arbaeen (Imam Hussain A.s.), stressed Maulana Abbas Kumaili frantically to the Governor, the conspiracy to pin the community to a wall would have failed today. The Governor was provoked by the Maulana admonishing him that the community has no tolerance for violence and anarchy, it remained patience for this much time only and would not forgive its malefactors, beyond this the government should be ready for a civil unrest and the idea of a dialogue being closed, for otherwise they should immediate call upon an operation towards Lashkar-e-Jhangvi and Sipah-e-Sahaba arresting them with convictions put in order.

At this point the Governor assured the Abbas Kumaili and Shia leaders of governmentâ€™s support and ascertained austere convictions of illicit Sipah-e-Sahaba and Lashkar-e-Jhangvi, guaranteeing that the martyrdom of innocent Shiite populace would not go in vain. At this point Jafria Alliance Pakistan cautioned the Governor of the emissaries that remain in the current administration supporting and a party to the forbidden outlaw organizations

The meetingâ€™s agenda is to devise a solution to the current wave of target killings in Karachi and develop inter-sectarian fraternity.The suggestions include compensating the families of target killing victims and finding the root cause of the issue. Governor Ibad also ordered the city administration to assess the issue of compensation for the victims.

The governor said that a peace committee comprising Ulema and coalition parties would be formed to help control the situation from deterioration further.

A meeting of the committee will be held at the Governor House on Friday. The meeting will also be joined by members of the peace committee of the coalition parties

However, The Ulema of Ahl-e-Sunnat and Deobandi schools of thought also called on the governor separately at the Governor House on Thursday. Home Minister Dr Zulfikar Ali Mirza and senior officials were also present. 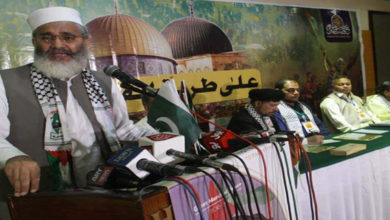 Despite revelations of RAW’s agent dangerous terrorist released in Baluchistan

How seminaries that promote violent extremism in Pakistan came into being