A Shia police officer was shot martyred when Armed militants of Sipah-e-Sahaba (Yazeed) and Taliban opened fire in Model Colony area of Karachi on Saturday.

Shiite News Correspondent quoted the IG Sindh police that Deputy Superintendent of Police (DSP) Mumtaz Ali Shah was leaving for work when two militants of banned terrorists outfit of Taliban and Sipah-e-Sahaba (Yazeed) opened fire on his car U-2354 Khyber at Soorti Muslim Society Model Colony near his house.
Due to firing, he was injured and rushed to hospital but he succumbed to injuries before reaching the hospital.
Police told that DSP Mumtaz Ali Shah was deployed at the Landhi jail after he received threats from banned terrorist outfits of Taliban and Sipah-e-Sahaba (Yazeed) militants.
Shaheed Mumtaz Ali Shah was hails from district Sehwan Of Interior Sindh. The genocide of Shiite Muslims have been continued in Karachi the commerical hub of Pakistan despite the so-called targeted operation of Rangers and Police are being witnessed in the city against Militants. 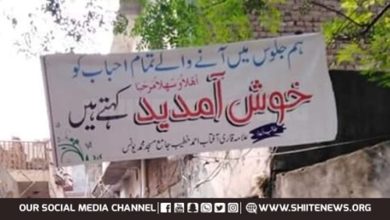