Saad Aziz, who was awarded death sentence by the military court for his involvement in the Safoora Goth bus carnage and murder of prominent human rights activist Sabeen Mahmud and other cases on Thursday, had told Joint Investigation Team (JIT) members that they were ‘inspired’ by the sectarian conflict in Yemen, it emerged on Thursday.

Saad told the JIT that before carrying out the massacre of Shia Ismaili community members in their community bus near Safoora Goth, they had watched a video in which Houthi rebels were allegedly seen killing ‘women and children’ in Yemen.

He said one militant, Abdullah Yusuf, had asked them to watch that video, according to contents of the JIT report reviewed by Dawn on Thursday.

Revealing gruesome details of the incident, Aziz said Tahir Minhas, Abdullah Mansoori and Umer, alias Hafeez, had started killing the passengers while he was making a video with camera, which fell down from his hand when the vehicle took a jerk. He ‘confessed’ killing the driver, but claimed that he did not kill women and children.

Saad confessed he and the other accused had fired upon and killed Sabeen Mahmud in Defence because she was using ‘filthy language’ against Maulana Abdul Aziz of Lal Masjid.

The JIT revealed that Saad studied up to O level till 2005 at a Beaconhouse school in Gulshan-i-Iqbal, but twice attacked the branches of the same school. Saad, alias Tin Tin, alias John, got exposure to militancy when he joined a multinational company.

“In 2009 he [Saad] went to Unilever company for four week internship where he met one Ali Rehman who was employed in Demand Planning Department.”

Ali Rehman had become a ‘little bit religious’ after performing Umrah. It was Ali Rehman who brainwashed Saad and turned his mind to jihad.

Next year, Ali introduced him to Haris who had remained associated with the Jamaat-i-Islami and later on joined Al Qaeda (Ahmed Farooq group). He remained in touch with Haris through the internet till he completed his education from IBA Karachi in 2011.

Saad had done his A Level from the Lyceum, Clifton. He was sent for militancy training in Miram Shah in 2011 by Haris. The JIT claimed that he had informed his parents that he was going for “training to Afghanistan”.

He completed the training in 25 days along with “eight or 10 other boys” and most of them were sent back. However, Saad along with three other boys was asked by one Ustad Ahmed Farooq to stay when he asked about his education.

“After about four and half months, he [Saad] came back to Karachi and joined his restaurant business.” Saad got married in 2012 and remained in touch with Ali and Haris and started writing articles about jihad in English.

During this period, Ali told Saad that the boys in the groups were not ‘satisfied’ with ‘activities’ of Haris. Thus he (Ali) arranged his (Saad) meeting with one Umer, alias Haider Abbas, alias Akif, who told him that “they had a lot of work to do” and advised him to join them.

They decided to contact each other through Skype, Whatsapp and Viber.

“He did not disclose anything to Haris regarding this meeting and remained in touch with Umer for six months and normally gave him pick and drop facilities,” said the JIT report.

Subsequently, in 2013, Umer arranged his meeting with Tahir Minhas. Next year, Saad, Tahir and Umer met in Hyderabad, where he along with Amir attacked a police van and killed three policemen.

Inspired by the IS

Saad told the JIT when the IS announced the Caliphate in Iraq in 2014, Tahir Minhas, Haider Abbasi and he were inspired by this new militant outfit because Al Qaeda had been ‘weakened’. Later they tried to join the IS, but failed. Saad and other accused were arrested by a counterterrorism department team led by Raja Umer Khattab. 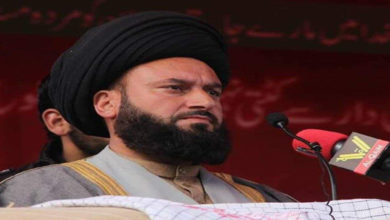 Jacobabad incident took place due to the ignorance and incompetency of rulers: Allama Maqsood Domki