Why those who were proclaiming about NAP are silent over mass murders of Shias in Karachi and Quetta? Allama Ejaz Bahishti

Central Secretary of MWM’s department of preaching Allama Ejaz Bahishti met brother Irshad at Wahdat House Islamabad and severely condemned the actions of security department for restricting mourning of Imam Hussain (as) (azaadari) in Islamabad and arrests of innocent mourners. Allama Ejaz said “Huge claims of security arrangements during Muharram ul Haram remained claims only because Shia genocide has been continuously going on since the start of Muharram, especially in Baluchistan. The government has been witnessing all terror attacks as silent spectator and has not taken any measure against the killings of innocent people in Karachi and Quetta although it is the responsibility of the government and security agencies to take actions against terrorists involved in spreading sectarianism during this sacred month. Government’s efforts for limiting the peaceful mourning congregations and creating hindrances in processions is saddening and unbearable. 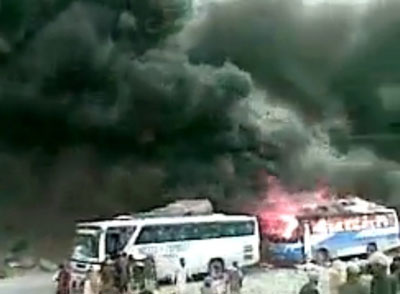 Saudi monarchy seeks return of $ 1.5 billion gift from Pakistan with mark up