Central Investigation Department (CID) of Karachi Police has arrested a major culprit of the Nursery bomb blast occurred on Chehlum-e-Imam Hussain (AS) that caused deaths of more than 12 innocent Azadaran-e-Imam Hussain (AS). Sources told Shiite News that CID used

Â the sketches of culprits, recently released by the police department with help of citizens who saw these criminals at the incident point at Nursery, while arresting them from Jet line, Karachi. It is learned that the culprit is a member of the banned terroristsâ€™ organisation, Lashkar-e-Jhangvi; however the culprit has also been identified from the footages of CCTV cameras, fixed at Regent Plaza. Sources added that near Regent Plaza some citizens bravely tried to seize culprits, who were involved in the incident and trying to escape from the crime scene. But they managed to escape; the citizens helped the police department in making sketches of these criminals. It is pertinent to mention here that the activists of some banned out fits, including Lashkar-e-Jhangvi and Jundullah, have killed more than 80 innocent Azadar, while the law enforcement agencies seem fail to grab master mind of these fatal blasts. 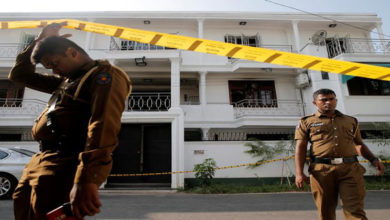 Pakistanis among foreigners held for probe into Sri Lanka bombings