Eleven detained Shia Youths on Thursday night released from the Central Jail of Karachi as local magistrate was approved their bail request. It may be noted here that the Sindh Police had arrested these innocent Shia youths on the fabricated charges of arsons after the Ashura bomb blast in Karachi. Â More than 45 mourners of Imam Hussain (AS) were embraced Shahadat in the road side bomb blast incident in Ashura-e-Imam Hussain (AS) procession in Karachi, the port city of Pakistan. According to the Shiite News Correspondent, Muntazir Naqvi, Kumail Ali, Mohammad Rizwan, Mohammad Jaffar, Taha Akber, Sibtain Shah, Mohib Abbas, Syed Iftikhar Hussain, Mohammad Ibrahim, Mohammad Shafiq and Mohammad Ali were released from the Jail Custody. However, the remaining Five detained Shia youths Raban Hussain, Afrad Hussain, Reyaz Hussain, Mohammad Ismail, Baqar Raza and Mohammad Ali will be released on Friday (tomorrow). Arif Jaffari legal Advisor of Millat-e-Jaffari talking to the Shiite News Correspondent said that eleven Shiaâ€™s were released on tonight, however the remaining five mourners will release from the Jail on Friday. It is pertaining to mention here After a four hour prolonged Sit-In demonstration near Chief Minister House leaders of ISO has been assured and convinced to end their protest as government decided to release detained persons. Negotiations between Government and leaders of Imamia Students Organizationâ€™s (ISO) concluded successfully on Tuesday night when Governmentâ€™officials assured them to accept all the demands presented by the marchers of â€œTahafuz-e-Azadariâ€ Rally and assured to release the innocent shia youths arrested by the Law Enforcement Agencies under arson charges after Ashura day bomb blast. 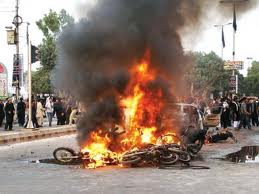 FIR of Scouts killing at Numaish Chowrangi: A conspiracy to safe terrorists