Shia Muslims largely participated in the Arbaeen (chehlum), 40th day of annual mourning that is observed across the world to commemorate the martyrdom of Imam Hussain (AS) and his companions.


Huge participation of around 1 million people was observed in Karachi, the provincial capital of Sindh province that is considered the economic capital of Pakistan.
There were reports of threat of terrorism but the Shia Muslims boldly, bravely and intrepidly came out of their homes to renew their pledge that they will not bow to the terrorists.
Thousands of women, children, youths, elderly persons, religious scholars and noha khwan were clad in symbolic kafan (Coffin) that is the final clothing of deceased Muslims for their burial into graves.
They wore symbolic kafan (Coffin) to express their pledge that they were not afraid of terrorists and they will finally defeat them.Â Â Â Â
Independent analysts, citizens and overall public opinion expressed their surprise over huge turnout because around 45 mourners (Azadars) were martyred in terrorism during Ashura procession of Shia Muslims in Karachi.
â€œNothing could change our mind. It is our inalienable Constitutional and legal right, let alone the Islamic principles,â€ said Syed Urooj Abbas, a youth talking to Shiite News.Â Â Â
Amer Shah, another youth had asked from another his friend at night before Arbaeen (Chehlum) if he had arranged his kafan (Coffin)Â  or not?
A minor girl was seen imploring her mother please get me to the Arbaeen (chehlum) procession. And her mother also took her to the mourning procession.
A teenager told his father that he will not take his 6 years old brother but the 6 years old insisted he wouldnâ€™t remain at home.
Shia children know that Ali Asghar (AS), 6 months old son of Imam Hussain (AS) also was murdered in Karbala by the ferocious army of Umayyad caliph Yazid.
It was the scene in the morning of chehlum day. At the afternoon, two cowardice terrorist attacks on the Shia mourners claimed lives of more than 25 persons. Whole of Pakistan was scared and tension prevailed across the country, let alone Karachi. But, the peaceful Shia mourners continued their annual mourning procession on the Chehlum as usual.
To the dismay and disappointment of the enemies, they largely attended the funeral procession and namaz-e-janazaâ€™s congregations. They remained peaceful despite provocative policies of the enemies.
However, a vast majority of people were of the views that Zionist-dominated United States and its Zionists-Wahhabi (Salafi’s) allies were responsible for the terrorism because they had invented Al-Qaeda and Taliban and imposed their misrule in Afghanistan.
â€œIt is managed and controlled chaos that is used as a weapon against innocent people and the Zionist-dominated U.S. and its Zionist-Wahhabi allies always defamed true Islam and true Muslims,â€ said an elderly person who studied the trends and modus operandi of terrorism and background of terrorists.Â Â Â Â Â
Imam Hussain (AS) was grandson of the Godâ€™s last apostle Hazrat Muhammad (SAWW) from his beloved and only daughter Fatima Zahra (AS) and her spouse Hazrat Ali (AS).
Brutal ruler of the dynastic Umayyad caliphate namely Yazid son of Muawiyah had forced Imam Hussain (AS) and his followers and lovers to choose between allegiance to the dictatorial misrule of Yazid and life.
To defend true Islamic ideology that reject the unjust rule and injustices in all its forms, Imam Hussain (AS), his followers and lovers struggled. In Muharram 61 A.H., the first month of formal Islamic Calendarâ€™s 61â€™s year, tyrannical, dictatorial and dynastic Umayyad regime imposed a war on Imam Hussain (AS), his family, followers and loyal companions in a bid to seek legitimacy through forced allegiance.
In Karbala (Iraq), around 72 male members from Imam Hussain (AS)â€™s family and companions fought the war against a heavily-armed and well-equipped over 35,000 strong army of Umayyad caliphate and sacrificed their lives.Â
It remains an interesting fact that no other group and party have ever expressed the pledge that Shia Muslims have always expressed against terrorists. Shia Muslims say that the mourning for the victims of terrorism remains an integral part of true Islam but many anti-Shiâ€™ites denominations oppose the mourning.
Shia Muslims say that Christians, Hindus and all non-Muslims enjoy complete freedom to exercise their religious and cultural rights in Pakistan and in many parts of the world but Shia Muslims are not allowed to observe their religious and cultural activities.
They say that Christians celebrate Christmas and observe other rituals. They say that Hindus celebrate Holi and Diwali. However, Wahhabiismâ€™s followers and their allies forbid the celebration on the birth anniversary of Mohammad (SAWW), the Prophet of Islam and mourning on the death anniversary of Imam Hussain (AS). Shia Muslims say that it is their hypocritical ideology that is used by terrorists.Â Â Â 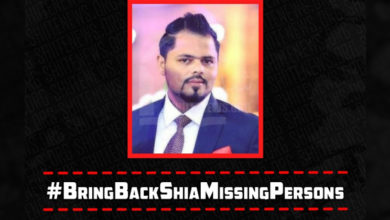 Another youth of Shia community subjected to enforced disappearance in Karachi