Shia youths broke the seal of a Masjid and Imam Bargah in Sargodha on the order of Allama Raja Nasir Abbas Jafri, secretary general of Majlis-e-Wahdat-e-Muslimeen.
Masjid and Imam Bargah Ali un Waliullah Sargodha was sealed off a year ago. The MWM and Imamia Students Organisation (ISO) staged a rally to protest against the seal in Block 7. The rally was turned into a sit-in on Khushab Road.

The protestors were demanding that the seal of the mosque and Imam Bargah should be broken forthwith. Allama Nasir Abbas Jafri directed the youths to break the seal who acted upon his order raising the slogans of Allah-O-Akbar.

The mosque and Imam Bargah were sealed off due to a nexus of banned Sipah-e-Sahaba/banned Lashkar-e-Jhangvi with police and administration.

Rawalpindi Police gear up for Muharram 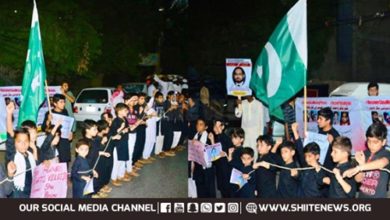