The complainant SHO mentioned in the FIR that during patrolling he saw a poster at Shaheed Chowk.

However, the biased SHO police registered case against those Shia Muslims who demanded Punjab government to end aforesaid ban on entry.

Through poster, they made this demand that brought an uncalled-for police case for them.

Chiniot police unjustifiable FIR shows height and depth of bias against peaceful Shia Muslims who made a legitimate demand.

Meanwhile, DC Chiniot banned entry of five law abiding Shia Islamic scholars and notables in that district of Punjab in the worst example of bias and discrimination.

Besides, DC has made Chiniot a no-go area for Allama Abdul Khaliq Asadi, Allama Shabbir Bukhari and Allama Mehdi Kazmi.

Meanwhile, many Pakistanis expressed surprise over this biased and discriminatory unjustifiable order.

Meanwhile, Protest demo against ban on entry of Shia Islamic leaders held under the aegis of Imamia Students Organization (ISO). 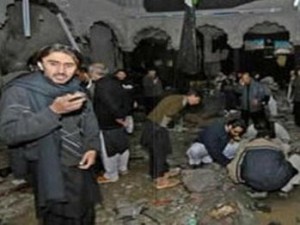