He briefed reporters about achievements in counter-terrorism measures which they forces have taken in recent times.

According to the “whole of nation approach, every Pakistani is a sepoy of Raddul Fasaad”, the ISPR chief said.

He gave an overview of the dividends earned through Operation Raddul Fasaad.

The army launched the operation on February 22 (today) four years ago. Howeverm this operation was not area-specific and its domain extended to the entire country.

“The strategic intent of Raddul Fasaad was, and is, a peaceful, stable and normalised Pakistan where people’s confidence in the state is restored and terrorists and extremists are rendered completely ineffective by curtailing their freedom of action,” he said.

He highlighted the role of the public in security operations, he added: “While armed forces fight terrorists, terrorism and extremism can only be defeated by the civil law enforcement agencies and society as a whole.”

The operation began at a time when terrorists attempted to take refuge across the length and breadth of Pakistan after their infrastructure in the tribal areas was destroyed and after they suffered heavy losses in various operations, he said.

“Considering this environment, Operation Raddul Fasaad was launched through a two-pronged strategy involving counterterrorism domain and counter violent extremism,” he said, adding that the basic cardinals of the counterterrorism plan were that the use of power is the privilege of the state only; stability on the western zone through an effective border management system; and ending terrorists’ support base across the country.

Talking about the counter violent extremism part of the strategy, Maj Gen Iftikhar said “it is clear that an ideology can only be countered by a superior ideology.” In this context, he added, the efforts involved implementation of the National Action Plan, bringing the tribal areas into the national mainstream, and curbing extremist activities through assisting the government in educational, madressah and police reforms.

He said Pakistan’s “grand strategy” in its war against terrorism was based on four concepts: “Clear, hold, build and transfer.”

Between 2010 and 2017, various areas were cleared of terrorists after major operations as per the ‘clear and hold’ phase and the writ of the state was being restored in the tribal areas, the DG ISPR said.

“Raddul Fasaad was the beginning of the build and transfer phase. During this, it was our responsibility to make hard-earned gains irreversible. This would be the real measurement of success against terrorism. After clearing an area [through] kinetic operations, socio-economic uplift and the functioning of civil institutions is the right step towards lasting peace.”

“They include some major and important IBOs as well which helped in curbing urban terrorism and many terrorist networks were broken,” Maj Gen Iftikhar said.

Citing some of the major IBOs carried out by security forces, he said the terrorists involved in the attack on a private hotel in Gwadar were killed in Balochistan; a suicide attack on an agricultural university was foiled in Khyber Pakhtunkhwa; and the attacks on the Pakistan Stock Exchange and the Chinese consulate in Karachi were foiled in Sindh.

“In these four years, more than 5,000 threat alerts were issued and the majority of them were neutralised before they materialised. During Raddul Fasaad, the Khyber-IV operation was also carried out, which was aimed at clearing the Rajgal valley and making the Afghan border safe,” he said, adding that last year in August, an operation was carried out in North Waziristan was conducted in a “most inhospitable terrain”.

“These were a few areas which had been left because they were difficult, so they were also completed. During this [process] the state’s writ was re-established in about 750 sq ft.”

A lot of progress was also made under Raddul Fasaad regarding deweaponisation and explosive control, the DG ISPR said, while adding that more than 72,000 foreign weapons and more than five million rounds of ammunition were recovered from across the country.

Detailing the security situation over the last few years, he said about 1,850 incidents of terrorism took place from 2017-2021, while 1,684 cross-border firing incidents took place on the Pak-Afghan border. During this period, 353 terrorists were killed and several were arrested as part of Raddul Fasaad, he told the presser.

“A lot of attention was given to capacity enhancement [of LEAs] from 2017-21; 58 new wings of FC have been established and 15 are yet to be set up. Work on the Pak-Afghan border fencing is 84 per ent complete, while on the Pak-Iran border more than 43pc work has been done. Additionally, 497 border posts and terminals have been built,” he said, adding that an integrated transit trade management system was being installed at Torkham and Chaman borders which would be operational in about two years. 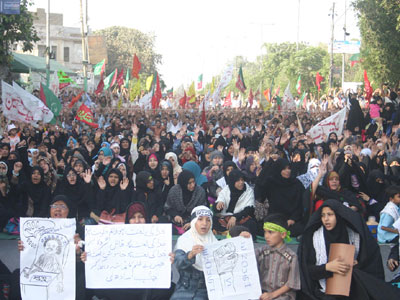 MWM sit-in at Numaish roundabout against genocide of Shia Muslims