Qadri stressed forging unity among the ranks of Muslims to jointly work for progress and prosperity of the country to frustrate the conspiracies of anti-Islamic forces.

While chairing the conference, he further said that without unity and harmony among the various sections of the society, Pakistan cannot move forward on the path of progress and development.

The minister said the conspiracies of destabilizing Pakistan have already been frustrated. He vowed government would not allow anybody to fan hatred in the name of religion in Pakistan.

He said Muslims can overcome their problems by strictly following the teachings of the holy prophet (PBUH).

Sunni Mufti Gulzar Naeemi underlined affection with the last prophet Muhammad (PBUH) as the most preliminary obligation of a Muslim.

He stressed forging unity among the Muslims for achieving prosperity.

Dr Raghib Hussain Naeemi emphasised upon all to strictly avoid hatred and sectarianism.

Furthermore, the speakers stressed implementation of Paigham-e-Pakistan initiative as the most suitable tool to deal with intolerance in the society.

They urged to encourage the people belonging to different walks of life towards constructive activities to realise the dream of building a tolerant society. 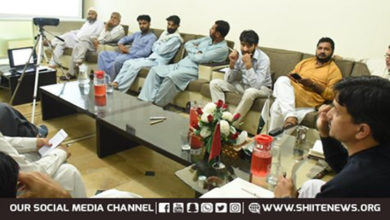 All set to commemorate Allama Arif Hussaini anniversary in Islamabad