The Sindh High Court (SHC) Thursday took a suo moto notice of three Shia lawyersâ€™ martydom in Karachi on Wednesday, summoning police and Ranger chiefs in the court.
According to Shiite News Correspondent,Three shia lawyers including father & son and nephew were shot martyred and a fourth Baber wounded on

Wednesday in attack of outlawed outfits Sipah-e-Sahaba (SSP) and Lashkar-e-Jhangvi (LJ) in Karachi. Armed motorcyclists sprayed bullets at their car in Arambagh area.
SHC Chief Justice Musheer Alam on Thursday summoned Inspector General (IG) Sindh Police and Director General Rangers, seeking a report from the officials on Wednesdayâ€™s Target killing of Shia Lawyers and law and order situation in the city.
Chief Justice of Pakistan Justice Iftikhar Muhammad Chaudhry has vehemently condemned Target killing of three Shia lawyers in Karachi as the legal fraternity boycotted court proceedings to protest the incident.
The CJP said on Thursday that the routine proceeding in Supreme Court of Pakistan would continue, adding that there would be no affect on cases due to lawyersâ€™ absence.
Responding a call given by bar associations of Karachi, Islamabad and Rawalpindi, the law practitioners observed strike today, boycotting court proceedings in Punjab and Sindh. 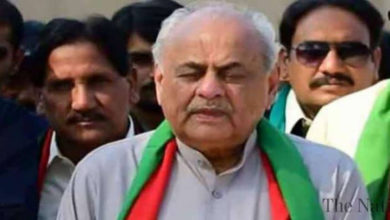