Imamia Students Organisation Multan chapter staged a demonstration on Tuesday to condemn the terrorism in Khanpur chehlum procession.
A large number of students participated in the demo. They were chanting slogans against the known terrorist of banned Lashkar-e-Jhangvi namely Malik Ishaq who belongs to district Rahim Yar Khan in which Khanpur is also situated.

â€œMalik Ishaq, a notorious terrorist of the banned Lashkar-e-Jhangvi has been given protection and protocol by Punjab government,â€ said Javad Jafri, divisional chapter president of ISO Multan.

They cited that high police official had not admitted it was a bomb blast. Instead, he tried to absolve himself saying that alam pak had touched wires or transformer exploded due to sparking. Later, he had to admit the factual position. 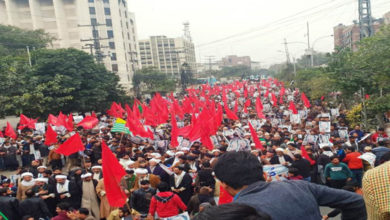 Down with US rally marks solidarity with Iran over Soleimani assassination