The Syrian leader has held the US and its Western allies responsible for the collapse of the latest ceasefire in his country, saying they resort to the truce option only when the terrorists they support begin to flounder on the battlefield.

In an interview with the Serbian Politika newspaper released on Thursday, President Bashar al-Assad said the Western states, particularly the US, use terrorism and terror groups as a “card” to play a “political game” in pursuit of their personal interests.

He also cast doubt on the Western states’ sincerity in their repeated calls for a cessation of hostilities in Syria, saying “they always ask for ceasefire only when the terrorists are in a bad situation, not for the civilians.”

“They (Westerners) try to use those ceasefires in order to support the terrorists, bring them logistic support, armament, money, everything, in order [for them] to become stronger again,” Assad added.

”So, who’s to blame?” asked Assad, adding, “It’s the United States and its allies, the Western countries; because for them, terrorists and terrorism are a card they want to play on the Syrian arena … they are not against terrorists.”
The Syrian head of state further said Washington and its partners are engaged in a “war of attrition” against his country and its allies, including Russia and Iran, by backing the terrorist outfits.

A week-long ceasefire in Syria, brokered by Russia and the US, came to an end on September 19.

Damascus refused to extend the deal after US-led warplanes carried out airstrikes on a Syrian army base in al-Tharda Mountain near the airport of the eastern city of Dayr al-Zawr in violation of the agreement.

The air raids killed 83 Syrian soldiers and wounded at least 120 others.

Syria’s Foreign and Expatriates Ministry condemned the incident as a serious and blatant attack on Syria and its military.

Commenting on the airstrike, Assad said the Americans launched the “premeditated” assault in a bid to undermine the position of the Syrian army at a time when Daesh is shrinking and the Takfiri Jabhat Fateh al-Sham, formerly known as al-Nusra Front, has been defeated on many fronts.

“It wasn’t by coincidence because the raid continued more than one hour, and they came many times,” he said, adding, “They didn’t attack a building to say ‘we made a mistake’. They attacked three big hills.”

The Syrian president further went on to say that the bombings allowed Daesh to target the affected area.

“It means that ISIS (Daesh) gathered their forces to attack those hills. How did ISIS know that the Americans would attack that Syrian position? It means they were ready…. This is an explicit and stark proof that the Americans are supporting” the terror group, he pointed out.
Assad further held terrorist groups operating in Aleppo accountable for an assault on a UN aid convoy in the area, stressing, “They have an interest in attacking that convoy; we don’t have.”

On September 19, at least 18 trucks in a 31-vehicle convoy were destroyed as they came under attack while en route to deliver humanitarian assistance to the hard-to-reach town of Urum al-Kubra near Aleppo.

He further accused the West of seeking to use the attack on the aid convoy as propaganda against Syria and taking advantage of the “humanitarian mask” for more intervention in the Arab state. 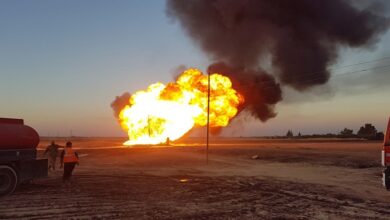