The Syrian government signs a peace deal with a militant group northeast of Damascus as UN Special Envoy Staffan de Mistura arrives in the capital ahead of Geneva talks.

The village of al-Nasiriyah, some 70 km (45 miles) from Damascus, become the latest location in Syria to have a local truce agreed between government and opposition groups.

The deal is set to boost the Syrian army in its push to drive out Daesh and Nusra Front terrorists from their positions, including in Aleppo which government troops are preparing to recapture.

Syrian forces have liberated large swathes of the provinces of Latakia, Hama and Homs, with some 60 residential areas such as Nasiriyah signing the truce agreement with the government.

Many of the groups signing truces with the government join Damascus in the fight against the Takfiri Daesh terrorists and other extremist groups which are not party to the cessation of hostilities.

On Sunday, a representative of the armed opposition group in Nasiriyah pledged to help the government fight against Nusra Front.

“We oppose the extremist group. We, with weapons in our hands, will fight against the extremist group. Three days ago, we were engaged in a fierce battle with them in a city, which is not far from here. We are willing to help the government troops to fight against them,” Reuters quoted him, identified only by his first name as Mohammed, as saying.

Russia mediated the deal on the request of local residents, Defense Ministry spokesperson Major General Igor Konashenkov said, adding “the people made their own choice in favor of reconciliation.”

“Today all documents are signed and people returned to peaceful life,” he said.

Russian soldiers also distributed humanitarian aid in the form of of flour, bread, canned goods, rice and sweets for children, to local people who lined up in front of trucks carrying relief, the AFP news agency reported.

In September, Russia launched a massive military campaign on the request of the Syrian government to prevent Takfiri terrorists from capturing further territory.

Since then, Moscow has mediated several local truces. “Russia is acting as a mediator,” said Yury Zrayev, leader of the Russian team overseeing the implementation of the six-week ceasefire around Damascus.

Along with Washington, Moscow also brokered a ceasefire for the whole country, which has largely held since coming into force on February 27.

On Sunday, de Mistura arrived in Damascus in a bid to advance struggling diplomatic efforts to maintain the “cessation of hostilities agreement” which has come under new strain amid intensified fighting in Aleppo.

The UN envoy was scheduled to meet the Syrian foreign minister and his deputy and planned to also visit Iran ahead of the new round of peace talks in Geneva set for April 13.

The Syrian government’s delegation, however, is expected to arrive in the Swiss capital on April 14, a day after parliamentary elections in the country.

The last round of the UN-backed peace talks for Syria came to a halt on March 24 over disagreements on the role of President Bashar al-Assad in Syria’s future.

The foreign-backed Syrian opposition says Assad must step down before a transitional government can be established.

Last month Foreign Minister Walid Muallem reiterated that Syria “will not talk with anyone who wants to discuss the presidency,” adding “Bashar al-Assad is a red line.”

“If they continue with this approach, there’s no reason for them to come to Geneva.” He said the purpose of the talks was to agree a new constitution and the modalities for a referendum to sanction that constitution.

Syria has been gripped by foreign-backed militancy since March 2011. The so-called Syrian Observatory for Human Rights says at least 270,000 people have been killed in the conflict; however, some reports put the death toll as high as 470,000. 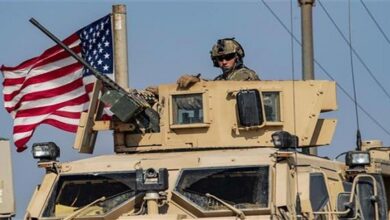 Militants’ Lab Equipment in Douma Made in UK or Germany: Ex-UN Commission Member