The United Arab Emirates (UAE) is using the new coronavirus to sign deals with Israel in the latest bid by Arab rulers to normalize ties with Tel Aviv, London-based al-Quds al-Arabia reports.

The newspaper said on Friday 42 Emirati companies had inked an agreement with two Israeli companies — Israeli air industries and Raphael — to purportedly develop technological solutions to rein in the pandemic.

The two Israeli firms are affiliated with the regime’s war ministry and provide the military with equipment and missiles.

On June 26, the UAE officially announced the launch of joint projects with Israel in the medical field especially in the fight against the coronavirus, and on the same day Israeli media revealed that Abu Dhabi had provided Tel Aviv with 100,000 test kits for the virus.

Israeli prime minister Benjamin Netanyahu announced the following day that the regime would be cooperating with the UAE in battling the disease despite the absence of diplomatic ties between the two sides.

The UAE has so far delivered two shipments of virus-related medical aid via a flight to the Israeli-occupied territories.

The UAE has no diplomatic relations with Israel but, together with other Persian Gulf Arab states, has in recent years been moving increasingly toward the normalization of ties with the occupying regime.

Israeli foreign minister Israel Katz told a ministerial meeting in Jerusalem al-Quds on August 6 last year that he was working toward “transparent normalization and signed agreements” with a number of Arab Persian Gulf littoral states.

The article was shared without comment by bin Zayed. The tweet was immediately welcomed by Netanyahu who retweeted with the words, “I welcome the closer relations between Israel and many Arab states. The time has come for normalization and peace.”

Of all Arab countries, only Jordan and Egypt have open diplomatic relations with the Israeli regime.

The normalization efforts come as Israel is planning to annex major parts of the occupied West Bank, including the Jordan Valley – a controversial move that has been vehemently rejected by the Palestinians and their leaders.

Israel’s US-backed annexation scheme has triggered waves of protest rallies around the globe.

Palestinians want the West Bank as part of a future independent Palestinian state with East Jerusalem al-Quds as its capital. But Israel’s aggressive settlement expansion and annexation plans have dealt a serious blow to any prospects of peace. 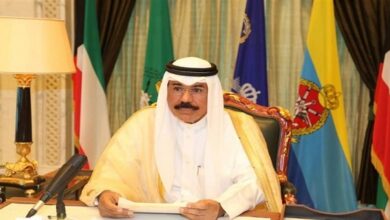