The U.S. occupation troops have transported new batches of Daesh (ISIS) terrorists’ families from al-Houl Camp in Hasaka countryside to Iraq, while the Turkish occupation has continued to establish more military posts in the surroundings of Ras al-Ayn City, northwest of Hasaka.

SANA’s reporter in Hasaka said that the U.S. occupation forces on Tuesday transferred more than 200 of Daesh terrorists’ families from al-Houl Camp to Iraq.

Media and local reports affirm the suspected relation between the U.S. occupation and Daesh terrorist organization as over the past few months, the U.S. occupation has transported thousands of Daesh families from different areas in the Syrian al-Jazeera region to its illegitimate bases and to Iraq.

In another context, the reporter indicated that the Turkish occupation forces have established three military posts in the countryside of Ras al-Ayn.

The first post was established in the area between Elouk village and Ras al-Ayn while the two others were established in the village of al-Ahwas and al-Dawodiya in the countryside of Abu Rasen, and they have been equipped with heliports.

The mercenaries of the Turkish occupation of terrorists on Monday looted equipment for irrigation wells in the village of Tal Mohammad, east of Ras al-Ayn, and the fuel and equipment for agriculture, in addition to storming a number of villages and towns in Ras al-Ayn countryside and raiding dozens of houses and looting stores of agricultural crops and home furniture at gunpoint.

The Turkish occupation forces and their mercenaries from terrorist organizations are working in the framework of the process of Turkification and demographic change in the villages that it has occupied in the northern countryside of Hasaka to exert pressure and intimidate the people to force them leave their homes and lands and replace them with terrorists and their families. 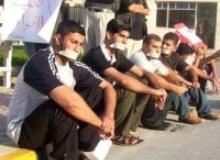