Lebanese caretaker Prime Minister Saad Hariri has accused Hezbollah of holding the country’s future hostage to its weapons, and has called on his supporters to rally on Sunday against what he called “non-state arms.”

In a clear criticism to Hezbollah, Â American and Israeli backed Hariri said that the only side in Lebanon which should possess arms should be the state and that only the state should make decisions of war and peace.

Hariri, in a televised speech on Friday, said the Sunday demonstration will be a show of support for the Lebanese state and its army as the only defender of the country.

Hariri and the March 14 alliance he belongs to, have recently ramped up their rhetoric against Hezbollah’s defense capabilities, arguing they could be used, in theory, to further the resistance movement’s interests inside the country.

This rhetoric has now reached its peak just after Hariri returned from Saudi Arabia, and this could indicate the Riyadh government’s possible support for Hariri’s camp.

Hariri also claimed that it was the Shias in Lebanon who first revolted against the use of arms.

But some analysts believe that when it comes to Hezbollah’s military assets, the majority of Lebanese back the resistance which has liberated major areas of Lebanese territory and was able to successfully confront Israel during the 33-day war in the summer of 2006.

Hezbollah maintains that its arms are only meant for the liberation of the Lebanese land still under Israeli occupation in south Lebanon and defending the country against any Israeli attacks.

The political debate in the country over the role of Hezbollah’s defense power can well be reflected on the streets of Beirut.

But regardless of this argument, Israeli officials frequently threaten to wage war on Lebanon and the Israeli military aircraft violate Lebanese airspace on an almost daily basis.

Military experts believe that Hezbollah has proven itself to be the most effective side to confront and deter Israeli threats and that the Lebanese army in its current structure will be no match for one of the most technologically advanced militaries in the world.

Some observers look at Hariri’s use of the issue of Hezbollah’s arms as a part of a foreign campaign to target the resistance. They also believe that the campaigns like this could backfire and mobilize more support for the Hezbollah’s well-recognized stand — the only organization to have defied the Israeli military machine. 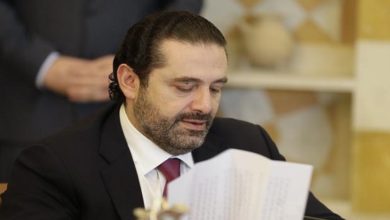