Sheikh Qassem ٍSays Won’t Clarify Nature of Hezbollah Response to Zionist Strike on Syria: Let the Israelis Have Their Own Estimations

Hezbollah Deputy Secretary General Sheikh Naim Qassem stressed that the Resistance will not allow the Israeli enemy to change the rules of engagement, reiterating its capability to confront any Zionist war.

“Israel’s political confusion and low expectation from war outcomes as well as the US President Donald Trump’s quagmire eliminate the possibility of an imminent eruption of the war.”

In an interview with Al-Mayadeen News Channel Sunday night, Sheikh Qassem pointed out that what happened in Syria was an Israeli attack which claimed the martyr Ali Kamel Mohsen, rejecting to clarify the nature of Hezbollah response to this assault.

Let the Israelis have their own estimations and calculations in this regard, according to Hezbollah Deputy Secretary General who added that the Resistance response to any Zionist war will employ military capabilities much more developed than those it used during 2006 War.

Commenting on the US interception of the Iranian passenger plane in the Syrian airspace, Sheikh Qassem emphasized that the Americans want to frustrate and deactivate the strategic pact between Iran and Syria.

“Absence of US strategic project in the Middle East will allow the axis of resistance to achieve more victories.”

Sheikh Qassem indicated that the major countries do not want to help Lebanon financially in order to impose on it to play a role that serves the ISraeli interests in the region.

Hezbollah seeks Lebanon’s strength and independence, Sheikh Qassem said, adding that the party’s popularity, not military power, enabled it to be represented effectively in the parliament and the government.

Sheikh Qassem indicated that Turkey is trying to establish a political influence in northern Lebanon through supporting certain figures, like Ashraf Rifi and Nabil Al-Halabi. 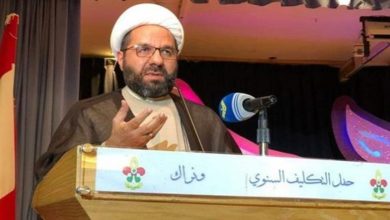