President Barham Salih says Iraq will under no circumstances allow the US military to use its bases in the Arab country for an act of aggression against neighboring Iran.

In an interview with the CNN in London on Tuesday, Salih stressed that American troops had been invited to Iraq solely for helping Baghdad fight the Takfiri Daesh terrorist group.

Asked about US President Donald Trump’s comments in February that he wanted to maintain a US military presence in Iraq to “watch” Iran, Salih said that Baghdad had already clarified its position.

At that time, he noted, the government of Iraq said in a statement that “the American troops, the coalition troops in Iraq are there again at the invitation of the Iraqi government for the specific exclusive mission of fighting ISIS (Daesh).”

“We do not want our territory to be a staging post for any hostile action against any of our neighbors, including Iran,” the Iraqi president said. “This is definitely not part of the agreement between the Iraqi government and the United States.”Concerns about US-Iran tensions

Elsewhere in his interview, Salih said he was truly concerned about the recent escalation of tensions between the US and Iran and its ramifications for Iraq.

He also welcomed Trump’s recent reported decision to cancel a strike on Iran, emphasizing that the region needs fundamental solutions rather than a war.

“Obviously we are happy that a war has been averted. This part of the world has been going through cycles of conflict for so many years. We don’t need another war and there is no military solution to this problem. There are serious problems afflicting regional order in the Middle East,” he said.

“It is easy to start a war, but very very difficult to end the war,” he added.

The Iraqi president further questioned the efficacy of the US’s policy of sanctions against Iran and underlined the need for dialog.

“[There is ] no doubt … that sanctions are hurting. The escalation is hurting the entire region not just Iran, to be fair,” he said.

Salih also referred to social, cultural and economic ties that have bound Iraq and Iran for centuries, saying it is actually impractical to separate the two nations.

“To expect Iraq to basically separate itself from Iran with 1,400 kilometers of borders and the important social, religious, economic interests that bind Iraq and Iran together is just not practical,” he said. 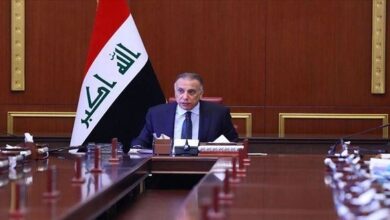