Iraqi pro-government fighters from the Popular Mobilization Units (PMU) have stopped a “suspicion reconnaissance mission” by US military forces to collect critical information about the movements and positions of the voluntary forces in the country’s western province of Anbar and on the border with crisis-hit Syria.

Commander of the volunteer forces – better known by the Arabic word Hashd al-Sha’abi – in Western Anbar, Qassim Mosleh, told the Arabic-language al-Sumaria television network on Tuesday that the US action amounts to the violation of the Iraqi sovereignty, and could have seriously endangered Iraqi border troops by exposing their deployments and arms depots to terrorist groups.
Mosleh went on to say that Hashd al-Sha’abi fighters forced American troops to return to their base, and not approach them.
Hashd al-Sha’abi fighters played a major role in the liberation of Daesh-held areas to the south, northeast and north of the Iraqi capital Baghdad, ever since the terrorists launched an offensive in the country in June 2014.
Iraq has repeatedly condemned allegations of sectarian nature against the voluntary force.
In December 2016, Baghdad warned Riyadh of the ramifications of meddling in Iraq’s internal affairs, after former Saudi Foreign Minister Adel al-Jubeir said Iraq cannot realize unity with the presence of the Popular Mobilization Units.
Saudi Arabia has repeatedly labeled the PMU, which incorporates volunteer forces from different Iraqi factions and tribes, as a Shia movement and called for the dismantling of the group.
The Iraqi parliament on November 26, 2016 approved a law giving full legal status to Hashd al-Sha’abi fighters.
It recognized the PMU as part of the national armed forces, placed the volunteer fighters under the command of the prime minister, and granted them the right to receive salaries and pensions like the regular army and police forces.
Former Iraqi Prime Minister Haider al-Abadi declared the end of military operations against the Daesh Takfiri terrorist group in the Arab country on December 9, 2017.
On July 10 that year, he had formally declared victory over Daesh in Mosul, which served as the terrorists’ main urban stronghold in Iraq.
In the run-up to Mosul’s liberation, Iraqi army soldiers and volunteer Hashd al-Sha’abi fighters had made sweeping gains against Daesh.
Iraqi forces took control of eastern Mosul in January 2017 after 100 days of fighting, and launched the battle in the west on February 19 last year.
Daesh began a terror campaign in Iraq in 2014, overrunning vast swathes in lightning attacks. 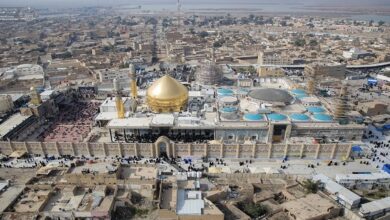