Qais Khazali, a leader of Asaib Ahl al-Haq (AAH), an Iraqi Shiite paramilitary group, underlined the necessity for the withdrawal of all US military forces from Iraq.

“We firmly dismiss the US military presence in our country after annihilation of the ISIL to safeguard Iraq’s national sovereignty and security against the disintegration plots which serve the Zionist regime,” Khazali was quoted as saying by the Arabic-language al-Mayadeen news channel on Monday.

He said that the Iraqi air force which is equipped with F16 fighter jets doesn’t need the US warplanes and helicopters.

Spokesman and a senior commander of Iraq’s Kata’ib Hezbollah (Hezbollah Battalions) popular forces Jafar al-Hosseini warned earlier this month that the chances are more than ever that clashes break out between them and the US military men deployed in the Arab country.

“Clashes may break out with the Americans at any time, and this time no mediation will help the Americans and it is not like the past,” al-Hosseini was quoted by the Arabic-language al-Mayadeen news channel as saying.

He described the US military deployment as occupation of Iraq, and said, “It was the Americans who brought the ISIL to Iraq to have a pretext to return.”

Al-Hosseini said that the weapons and equipment seized from the ISIL terrorists in the town of Tikrit in Iraq were the ones used merely by the American forces.

Also, in September, al-Hosseini had warned the US to withdraw its military men from Iraq once the ISIL is fully defeated in the country..

He described the American forces’ presence as the biggest obstacle to Iraq’s anti-terrorism fight, and called for the withdrawal of all US troops from Iraq after the ISIL will be defeated. 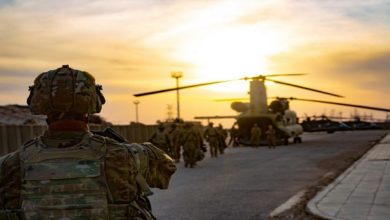 US forces withdraw from strategic K1 Air Base in northern Iraq