Iraqi Prime Minister Mohammed Shia’ al-Sudani has underlined historic ties with Iran after the Iranian Foreign Ministry summoned the Arab country’s ambassador to Tehran to protest the use of the distorted name for the Persian Gulf at a regional football competition.

Sudani described the Baghdad-Tehran relations as deep-rooted and historic, stressing that the common border between the two neighbors extends for more than 1,200 kilometers and they enjoy cultural, religious and social commonalities, the National Iraqi News Agency reported.

“Tehran has been supportive of political developments in Iraq following a change in the country’s political system in 2003,” the Iraqi premier noted.

“Iran assisted Iraq in the fight against the Daesh terrorist group. The two countries maintain positive relations, and their cooperation and relations are away from interference in each other’s domestic affairs.”

Sudani stressed that his government “does not support political polarization, neither in the region nor anywhere in the world, and purses the principle of balanced relations to interact with neighboring countries.”

“We also announce initiatives aimed at economic partnership so that Iraq will be the venue where regional countries would come together in accordance with the common interests of their respective nations,” he remarked.

“Iraq has also developed initiatives designed to bridge differences between Iran and Arab states. In my opinion, reduction of existing tensions and convergence of viewpoints will help ensure the security of Iraq and the region.”

The spokesperson for Iran’s Foreign Ministry Nasser Kan’ani said on Monday that Tehran has expressed its objection to Baghdad over using the fake misnomer of “Arabian Gulf” to refer to the Persian Gulf.

The Iraqi southern city of Basra is hosting the premier regional soccer competition for the first time since 1979. Local officials have set up billboards to welcome foreign teams to the “25th Arabian Gulf Cup”, using the distorted name for the Persian Gulf.

The tournament that runs until January 19 also sees participation of teams from Bahrain, Kuwait, Yemen, Qatar, Saudi Arabia and the United Arab Emirate

Several international scientific conferences have been held in recent years to discuss the historical roots of the Persian Gulf.

Researchers from the most reputable academic centers worldwide are almost unanimous in their opinions that the body of water has been referred to as the Persian Gulf throughout history.

Some regional countries and Western publications, however, continue to distort historical facts by omitting “Persian” from the full name or using a misnomer. 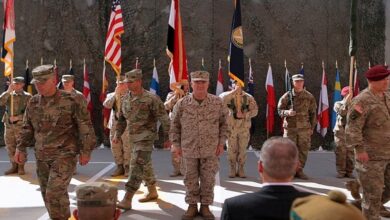 US developing military base in northern Iraq despite parliament’s call for troops pull-out: Report