International organizations and world countries have denounced in strongest terms artillery strikes against a tourist resort blamed on Turkey in the semi-autonomous Kurdistan region of northern Iraq, which killed at least nine civilians and wounded more than 20 others.

The UN Assistance Mission for Iraq (UNAMI) roundly condemned the shelling of the northern Iraqi hill village of Parakh in the Zakho district on Wednesday, and expressed its deepest condolences to the families of the victims and wished the injured a speedy recovery.

“Civilians are once again suffering the indiscriminate effects of explosive weapons. Under international law, attacks must not be directed at the civilian population,” the UNAMI said in a statement.

“UNAMI therefore calls for a thorough investigation to determine the circumstances surrounding the attack and emphasizes that the sovereignty and territorial integrity of the Republic of Iraq must be respected at all times.”

The UN mission then urged all parties engaged in military operations in the region to cease any violations against civilians, without delay.

Secretary General of the Arab League Ahmed Aboul Gheit said the shelling is an attack on Iraqi sovereignty, and represents a clear violation of international law and a flagrant breach of the principle of good neighborliness.

“The Arab League supports Iraq in rejection and condemnation of Turkish attacks, and that it denounces any encroachment or violation of the sovereignty of any Arab country,” Jamal Rushdie, a spokesperson for the secretary general, quoted Aboul Gheit as saying.

He called on Ankara to “make recalculations, maintain the principle of good neighborliness in its relations with regional countries, and refrain from carrying out military operations inside the territories of Arab countries under any pretext.”

The Arab Parliament also said it “condemns the brutal Turkish attack on Dohuk province in the Kurdistan region of Iraq, which resulted in the death of nine civilians and injury of several others.”

“This attack represents a blatant encroachment of all international conventions and norms, and constitutes a flagrant violation of Iraq’s sovereignty and the principles of good neighborliness,” it said in a statement.

The Arab Parliament further called on Turkey to “stop such hostile acts, respect the sovereignty of the Republic of Iraq, and abide by the principle of good neighborliness.”

Iranian Foreign Minister Hossein Amir-Abdollian held a telephone conversation with his Iraqi counterpart Fuad Hussein, denouncing the artillery strikes and expressing his sympathy with the families of the victims, the Iraqi government and nation.

He also underlined Tehran’s solid support for the stability and security of Iraq.

The top Iraqi diplomat, for his part, thanked Iran’s sympathy, and vehemently condemned the strikes, describing them as a violation of the Iraqi sovereignty and territorial integrity.

He said he visited the tourist resort, which had accommodated holidaymakers from the capital Baghdad and the southern port city of Basra, last night and was briefed on the investigations surrounding the circumstances.The Iraqi foreign minister dismissed allegations that PKK militants were active in the targeted area.

“The Islamic Republic of Iran considers the security of Iraq to be that of its own, and does not hesitate to provide any assistance in this regard,” Iran’s Foreign Ministry spokesman Nasser Kana’ani separately said.

Meanwhile, the Egyptian Foreign Ministry “condemned in the strongest terms the heinous attack, and stressed the need for respect for international principles and conventions concerning protection of civilians.”

It also underlined “full support for the sovereignty of Iraq, and its support for measures taken by the Iraqi government to preserve the security and stability of the country and its brotherly nation.”

Germany called for an urgent probe. “There must urgently be light shed on the circumstances of the attack and those responsible,” Germany’s Foreign Ministry said in a statement.

The United States also condemned the attack. “The killing of civilians is unacceptable, and all states must respect their obligations under international law, including the protection of civilians,” State Department spokesperson Ned Price said in a statement.

At least four missiles hit the resort area of Barakh in the Zakho district of the Kurdistan region, district mayor Mushir Mohammed told The Associated Press on Wednesday. All the casualties were Iraqi citizens.

The victims reportedly included Iraqi tourists who had come to the area to escape sweltering temperatures further south in the country.

Iraq’s Prime Minister Mustafa al-Kadhimi dispatched Foreign Minister Hussein and top security officials to the site, and ordered an investigation into the incident.

“Turkish forces have perpetrated once more a flagrant violation of Iraqi sovereignty,” Kadhimi said, condemning the harm caused to “the life and security” of Iraqi citizens.

“Iraq reserves the right to retaliate against these aggressions and take all necessary measures to protect our people,” he added.

Angry protesters on Thursday took to the streets, burning Turkish flags and demanding the expulsion of Turkish Ambassador Ali Riza Guney outside the Turkish visa office in the capital Baghdad, and in the shrine central city of Najaf.

In the holy city of Karbala, dozens of people protested in front of a Turkish visa center, burning a Turkish flag. Protesters also staged a protest in the city of Nasiriyah, situated about 360 kilometers (225 miles) southeast of Baghdad.

Militants of the PKK — designated as a terrorist group by Turkey, the United States, and the European Union — regularly clash with Turkish forces in the Kurdish-dominated southeast of Turkey attached to northern Iraq. 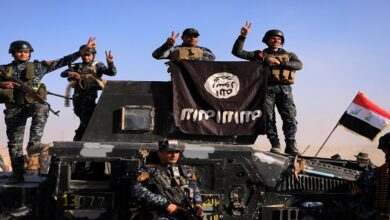